I was greatly saddened to learn that Sheila Whitaker passed away on Monday.
Sheila was head of programming at the National Film Theatre in London from 1984 to 1990, and director of the London Film Festival from 1987 to 1996.She also head of the National Film Archive collection of stills, posters and original designs
As a regular attendee at the festival, I had the pleasure of seeing Sheila introduce many screenings, and one memory sticks out in particular.

In 1996, David Cronenberg's Crash was due to be premiered at the London Film Festival. Unfortunately, a concerted press campaign had begun a day prior to the screening,calling for the film to be banned. Thankfully, the screening did take place, and Sheila introduced Crash, along with David Cronenberg, explaining she had encountered extreme pressure to pull the film but she fought for the right for us to make up our own minds on its merits.
Listening to her introductions and seeing her hold Q&A sessions with the cast and crew of many films, it was clear that Sheila absolutely loved her work.

In 2004, Sheila moved on to become Director Of International Programming at the Dubai International Film Festival for 9 years, and was looking forward to the 10th.
She served on international festival juries, who all benefited from her wealth of knowledge and experience and also found time to write for The Guardian, Observer and The Times. Sheila also edited and co-edited several publications - one devoted to women's writing and was awarded was awarded an Honorary Doctorate of Letters (D.Litt) by the University of Newcastle and an Honorary Doctorate of Law by the University of Warwick.

The film world is a poorer place for her passing. My sincere condolences to family and friends. 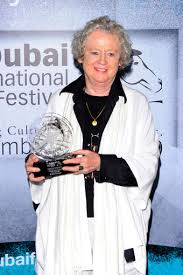