Chaos At The Kings Hall: My First Night With The Clash

Music first got me in its clutches during my schooldays. The likes of Bowie, Mott The Hoople, Roxy Music, Marc Bolan and The Sweet kickstarting my musical education, and making albums and 45rpm singles a must when birthdays, Christmas or just special treats rolled around. I began to read the music press when I was 14, and became aware of the wonderful world of live music, where bands would play at concert venues up and down the country with loyal followings taking the chance to see their heroes play live. When I was 16, I started going to concerts, and some good friends lined up a series of gigs to go to at the Kings Hall in Derby. Bands came thick and fast in those days, and almost every week offered a new band to see: Man, Budgie, Curved Air, Steve Hillage, Streetwalkers, Fruupp.... they were great nights out, but deep down inside, I was bored. Like many others, I was waiting for something to happen, and didn't really know it.
Then Punk hit the headlines and the airwaves and I knew this was it. John Peel's radio show from Monday through to Friday unleashed a host of exciting new bands, and The Kings Hall - built over a swimming pool - took the baton and ran with it. In October 1977, The Boomtown Rats played there, and I enjoyed watching them as they were one of the flavours of the month at the time, even though Bob Geldof's onstage patter didn't particularly convince me and several others I talked to. At the time, I was out of work, awaiting my first job which would turn up out of the blue in December of that year,and would give me some much-needed cash to fuel my passion for music. London was calling to me, but a gig on 24th November at the Kings Hall was the only thing on my radar at the time, and would mark the first time I saw The Clash onstage. 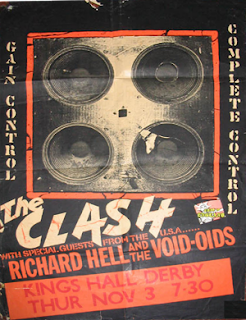 So, I turned up at the hall early and was greeted by a long line of like-minded souls who walked down over half the length of Queen Street to join the queue. After what seemed like an age, the queue began to move forwards and before we knew it, we were inside and making a beeline for the bar to grab that first pint of the evening. I was already aware of the supporting acts and resolved to watch them both. An all-girl bands called The Lous (who were French) took the stage first, but sadly only lasted a couple of songs, thanks to some members of the partisan crowd who only wanted to see The Clash. Shower after shower of spit, beer cans and bottles, and other projectiles usually confined to Derby County's Baseball ground battles between rival fans were all aimed at the band who took flight, leaving those of us who wanted to see them utterly frustrated. Next on the bill was Richard Hell And The Voidoids; a band that had thrilled me with songs like "Blank Generation" and "Love Comes In Spurts". Unfortunately, Richard and his band suffered the same treatment as The Lous but they never took a backward step and played their set in full, earning great respect in the process.
Now the stage was set for The Clash, but the hour was getting late for Kings Hall gigs, where the headline act normally went onstage by 9.30pm. In the event, The Clash were still in their dressing room at 10.30, and with my last bus home only 15 minutes away, I had a decision to make: Should I Stay Or Should I Go? I reckon it took me all of a minute to decide I was staying to see the band. Having made that decision, the only course open to me was to sleep rough outside as none of my friends at the time were into Punk and therefore didn't attend the gigs. At 10.40pm, the lights went down, Joe Strummer and co walked on stage and went straight into "London's Burning". I knew I had made the right decision!The band and the atmosphere were simply electric, with all the songs we knew so well present and correct, and a few new ones we would grow to love. This gig marked a first for me,in that it was the first time I extricated myself from the pogoing masses down the front and went onto the balcony where I stood and watched the band and the crowd's reaction. The song I chose was "Police And Thieves". Truth was, I needed a breather, but it became something I would do at every gig I attended. In years to come, I would appreciate just how much the likes of Iggy, Pete Murphy, Lydon, Siouxsie, Ian Curtis and others commanded the stage and Joe was the same. Police And Thieves may have originally bore the name of Junior Murvin but Strummer went on to own it, and the song became of of my live faves: quite simply one of the most intense musical experiences you could imagine. All too soon, the gig was over and I trudged out into the chilly November evening on a high, which was slightly diluted by the fact that my nice warm bed seemed a world away. After walking for what seemed like ages, I finally dossed down in a bus shelter and waited for dawn. I know at some point, I finally got to sleep. Whether I dreamed or not is beyond my memory, but if I did, I'd like to think I dreamed of Joe and the boys. When morning came, the sound of a bus honking its horn rudely awoke me, and I gathered my thoughts and realised I would return to the Kings Hall later that night. The Jam were headlining with Neon Hearts supporting, but that's another story.

Now, an illness called Meniere's Disease has largely taken control of my life, meaning attending live music is out of the question but I've had my day in the sun and been extremely fortunate to see some terrific live acts. I've seen Patti Smith at Birmingham Odeon, The Stranglers, The Jam, The Banshees on many occasions,The Lurkers play a super set at London's Marquee club as the fog rolled in on Wardour Street outside, I've seen The Who and The Rolling Stones rock the old Wembley football stadium, Iggy, Lux, The Ramones and Lydon tear up the stage at Nottingham's Rock City, the great Joy Division play twice and got off my sickbed riddled with flu to drag myself to see The Clash at Derby Assembly Rooms. Wonderful nights indeed, but I really don't think any gig has ever matched The Clash at Derby Kings Hall.
You never forget the first time.

Email ThisBlogThis!Share to TwitterShare to FacebookShare to Pinterest
Labels: Joe Strummer, The Clash