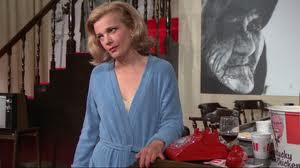 One of the most important home video releases of the year comes to Blu-ray, courtesy of the BFI.
John Cassavete's OPENING NIGHT was released in 1977 and remains a truly inspirational work, and not just for movie buffs.
Indeed, this film should be compulsory viewing for any aspiring director, actor/actress, writer and cameraman.
OPENING NIGHT is built around a play - 'The Second Woman' - which is finishing its out-of-town run before transferring
to New York.
The play concerns a woman who wants to fall in love, but is painfully discovering her time has passed. Myrtle Gordon
(Gena Rowlands) is surrounded by a dream team of a crew: playwright Sarah Goode (Joan Blondell); director Manny Victor (Ben Gazzara); producer David Samuels ( Pual Stewart) and actor Maurice Aarons who are aware they have a star in their midst whose performance will make or break the play.
Myrtle, however, is struggling to accept she is no longer the young girl of 17 who could "do everything", and for her, the play's central theme of growing old gracefully is a little too close to home.
Soon, Myrtle begins to change lines of dialogue and walk offstage in the middle of scenes. This leads to a series of confrontations that reside uneasily alongside the death of a young girl who was knocked down outside the theatre seeking an audience with Gordon.
This is a tragedy that has a profound effect, with Myrtle witnessing an apparition that may either be a ghost or her own younger self, refusing to be ousted by the 'second woman'.
Whichever theory you go with, it's an utterly compelling premise, carried along by Rowlands who can say more with a single look, a gesture, than many artists with two hour's worth of dialogue. This really is a magnificent performance, but it certainly doesn't dwarf the rest of the cast.

Gazzara as the long-suffering director; Blondell and Stewart who run the whole gamut of emotions as their ship slowly sinks and Cassavetes himself, who teams up with Rowland to delive some wonderul improvisation when the play opens in New York, while sharing a love/hate relationship with his leading lady.

As with many great films, it's the small things that leave almost as much of a mark as the major sequences:
Goode asking Myrtle her age - a series of requests that go unanswered as Myrtle cannot bring herself to utter two simple numbers and her arrival at a wake, where one of the grieving relatives declares, "You don't have children. If you had, you wouldn't have come here". It's a devastating encounter, that amplifies the passing of time during Myrtle's unfulfilled life, but still she presses on, determined to find a different way to play the role and find something human in the production

Dollars and reputations may well be on the line, but for Myrtle, the most important thing is to learn to grow old gracefully and brushing aside fears of being typecast as an older woman if the play is a success.
OPENING NIGHT certainly repays multiple viewings, and this BFI disc is the ideal vehicle for such a journey. 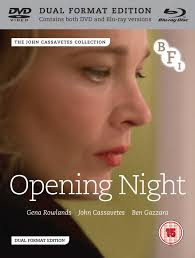 The transfer appears in the orignal aspect ration of 1.85:1. The film was transferred in high-definition on a Spirit Datacine from a 35mm colour reversal internegtive. Thousands of instances of dirt, debris and scratches were removes using the MTI Digital Restoration System. The mono 2.0 audio sountrack was remastered at 24-bit from a 35mm magnetic audio track, and audio restoration tools were used to reduce pops, hiss and crackles. The result is a presentaion that exhibits rich, well saturated colours and sharp detail.

On the extras front, we are treated to a commentary track with Bo Harwood ( music score composer)and Mike Ferris
(cameraman), moderated by Tom Charity. The track is a mixture of anecdotal and scene specific - the latter largely taking over for the last half hour - and it's a genuine pleasure to hear two of Cassavetes' 'family' talk about working with the man. Both have excellent recall and hold forth on a multitude of subjects, including how John always got his own way; the challenges of recording sound onstage and offstage simultaneously; the lighting for that wonderful mirror scene and the possibility that Bette Davis may have ended up playing the Sarah Goode role. While it's speculated that Davis would possibly have been harder on Rowland's character that Joan Blondell was, rest assured JC would have had the last word.

This BFI release also has 'Memories Of John' (DVD disc) and 'Falk On Cassavetes' (DVD disc) and an illustrated booklet featuring interviews wit and essays from Tom Charity, Al Ruban and Peter Bogdanovich (who, along with Peter Falk, has a cameo at the end).

Some 35 years and change later, OPENING NIGHT remains an astonishing work, and it's a joy to see it in the best possible light. The Blu-ray is locked to Region B.
Posted by Steve Langton at 02:10