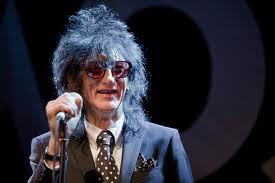 "I'm not the one who will have his life turned into legend. It won't be me.
It will be John Cooper Clarke."
Tony Wilson.

Ah, The Punk Rock Poet. I remember his gigs like I remember yesterday.
Suited-up, black tie, shiny boots and a hairdo that you could swear birds were nesting in.
Mostly performing solo, sometimes with a band, and always unleashing glorious volleys of poetry concerning Kung Fu,
rancid streets, raincoat-clad flashers and unhinged towns where "The fucking girls and fucking guys have fucking murder in their fucking eyes."

Never have the means streets of England been laid open with such insight and such venom, and this BBC4 documentary -
directed and shot by John Ross - bestows reverential treatment on this one-of-a-kind performer.

Evidently... covers John's schooldays - "They taught you how to read and that's the main thing" - which kick-started
his love of poetry, and moves onto his early gigs and his heroin addiction which lead to a frenzy of live activity to fund his habit.
Those lost years of the 1980s' saw John emerge as a survivor, while adding to the legion of admirers he accrued during those early days of Punk.

We hear about his favourite band (The Ramones); the days he spent sharing an apartment with Nico and John Cale, and
those wonderful gigs.John recalls the apprehension he felt before playing the infamous Glasgow Apollo (his set lasted
just 4 minutes), but states that Punk audiences were usually far easier to perform to than the hostile nightclub circuit. 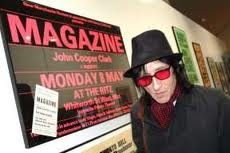 Then of course, we get classics such as Beasley Street, Kung Fu Interntional and Evidently Chickentown; the latter
made even more famous in the penultimate episode of The Sopranos.
The documentary is a beautiful shot, often moving account of the life and times of JCC; never more so than the footage of John inside the modern-day Red Lion pub in Salford, where he surveys the scene as a 1977 recording plays spookily in the background. Then and now.

One of the most pleasing aspects of this production is the number of musicians and artists who pay tribute to the man:
Steve Coogan, Dave Formula, Jarvis Cocker, Kate Nash (her fave JCC track is 'Twat'!), Don Letts, Pete Shelley and
Peter Hook are just a few of those who speak with love and affection for this National Treasure.
So what is it about JCC that has captured our hearts. That he was something different. That he showed us the value of words and their possibilities. That he made us laugh and made us think about our lives, the streets where we live and the people we have met and are yet to meet.

Happily, John has been off the smack for many years, and is continuing to delight us. I have a feeling he will outlive the bloody lot of us.
For his gift of not only bringing poetry to Punk but also for giving it back to the working class, deserves a knighthood

Long may he reign!