Memories Of The Marquee Club, London 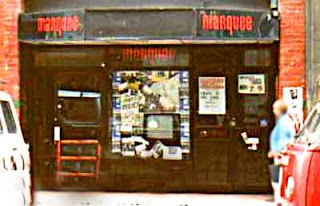 The Marquee Club. It was a legend long before I'd even dreamt of going to gigs, and drew tens of thousands of people to its main home at 90 Wardour Street, London. It would take me several weeks to list every band to tread those hallowed boards, but the likes of Jimi Hendrix, The Who, Ultravox, Sex Pistols, Joy Division, Iron Maiden, Led Zep, The Jam, Genesis and The Police are names that demonstrate the club played an important part in live music on the UK circuit.

The Marquee opened April 1958 in Oxford Street, and established itself as a live showcase for Jazz and R&B with Sonny Boy Williamson and Cyril Davies just a couple of artists to appear regularly. The Oxford Street tenure would last for 6 years, boasting The Rolling Stones and Muddy Waters amongst an increasingly impressive roster of acts. At the fag-end of 1963, club owner Harold Pendleton was given 6 months notice to find new premises by the building's owners. In March, 1964, the club relocated to nearby Wardour Street where it would remain for 24 years. '64 proved to be a pivotal year, with the opening of Marquee recording studios and a long residency by The Who announcing that London had a very important club for music lovers. Over the years, The Marquee played host to the Psychedelic Scene, Progressive Rock, Punk, Mod, Heavy Metal and chart-orientated acts, moving with the times while also casting an eye back to 'old friends' who would often drop in to play 'secret gigs'. Those of you wishing to read the full history of the club are directed to http://www.themarqueeclub.net/index.php which includes a year-by-year record of most of the gigs that took place there. I was lucky enough to take in scores of gigs there, and the rest of this piece contains some of my memories of this club. 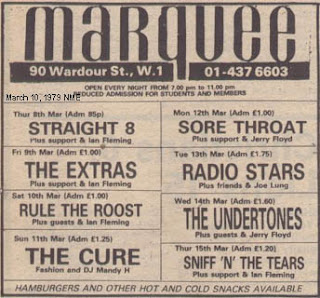 When Punk reared its ugly head, my taste in live music underwent a real sea change. Up to then, I'd stayed firmly put, in and around my home county of Derbyshire, hooking up with friends to see rock bands such as Man, Budgie, Curved Air and Streetwalkers amongst others. Now, it was time to venture further afield; both geographically and musically. I'd read and awful lot about the London music scene in magazines. Sounds and the NME both painted an exciting picture of life in our capital city, with venues such as The Music Machine and The Nashville playing host to a never-ending succession of live acts. So, on 20th July 1977, I found myself London-bound to take in my first gig at The Marquee. I'd already gained a fair idea of finding my way around London via trips to follow my local football team, and had little difficulty in getting to Wardour Street. Before long, I caught sight of that famous exterior and joined a long line of punks queueing for tickets to see Generation X. While Billy Idol's mob were never really on my list of bands to see, I had little doubt that the gig would be a real experience; a feeling that proved to be entirely correct. Just before I entered the club, two doormen turned away a couple of rough-looking individuals who were apparently banned from the club for fighting at previous gigs. Obviously not a place for the faint-hearted but once inside, I immediately knew this was my sort of club.

After paying for my ticket, I soon located the bar where I had my first pint of Marquee watery beer in a plastic glass. From the bar area, I watched drum kits and mic stands being assembled, followed by Gen X running through a couple of numbers for their soundcheck. Soon, it was time to head out from the confined space of the bar and enjoy a tip-top set from The Lurkers. In truth, Howard Wall and his boys took the honours that evening, but my dislike of Gen X certainly receded as I watched them battle through their set under an assault of plastic beer glasses, cans and shower upon shower of spit. I'd already seen a good many bands walk off stage during the same type of audience abuse but Gen X never took a backward step. Respect! 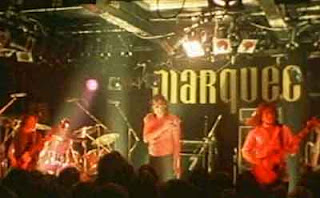 So, my first visit to The Marquee was over but I already loved this small, ramshackle club with its sticky floor and cramped conditions; the bar at the back offering the chance of a quick queue for a drink for those disinclined to barge through the packed bodies en route to the main bar area, and a selection of hot & cold snacks just to line your stomach for the next alcoholic onslaught. With a capacity of roughly 300, the club often crammed in over three times as many, making the nickname of 'The Soho Sauna' entirely accurate. On many occasions, we were dripping sweat and I swear the walls were having much the same problem. Nobody seemed to mind though, and if anything, it added to the atmosphere. Over the years, I noticed the doormen actively contributing to the numbers of folks attending, ushering in extra punters upon receipt of a premium charge. Fortunately, I never had to pay over the odds, preferring to grab a ticket in the afternoon of any gig where I knew demand would exceed supply. Then, I'd sometimes call in at the nearby pub called The Ship where I spied Siouxsie Sioux holding court on a number of occasions. The Banshees were an absolute legend way before 'Hong Kong Garden' shattered the airwaves, and a piece of graffiti on the Marquee entrance wall remained for many months after their vinyl debut: 'SIOUXSIE AND THE BANSHEES. SIGN THEM UP. DO IT NOW!' This impassioned plea greeted me on many occasions until I arrived there one night to find it gone, and with it went a part of the Marquee's character. I know the great lady herself visited the club as performer and audience member but I never saw her there. Lemmy from Motorhead, Phil Mogg, Joe Strummer, Phil Lynott, Howard Wall, Gaye Advert, Vic Goddard, Pete Shelley, Malcolm Owen, Paul Weller, Gene October and John Cooper Clarke were just a few of the faces I saw in the bar (the latter still looks much the same as he did 3 decades ago): a punk paparazzo's dream!

As far as crowd trouble was concerned, The Marquee was usually a hassle-free night out when compared to The Nashville or The Electric Ballroom. Sure, there were a few flare-ups but the only problem I ever encountered was at a Nine Below Zero gig when someone kicked me and tried to rip my watch from my wrist. A swift right hook to the jaw and he was down, leading to me facing the exit until an onlooker explained to the bouncers that I'd acted in self defence. The Marquee was actually safer than concert halls close to my home in Derbyshire, and I never felt threatened there. Over the years, I spent many, many enjoyable nights there and it remains my favourite venue for live music.

Years after the club shut down, there are still things I miss about my time there. The walk down Wardour Street, past film companies whose window displays were once home to posters for THE CHANGELING, CALIGULA and BLUE VELVET; past strip clubs and brothels where you really did quicken your step in case some over-zealous employee dragged you in, only for the doormen to relieve you of every penny you had, and then catching sight of the amusement arcade just down from Marquee on the right where fuck-knows who was hanging around outside in search of lost souls and their cash. Then, there are many memories of the club itself: the stage barely big enough to contain the band and equipment, the sights and sounds of the gathered masses drinking in the rock 'n' roll stench and finally departing the club in search of a good night's rest before doing it all over again the following evening. I honestly believe I would not be here now if I'd lived in London during the 70s and 80s but am glad I took the chance to visit on so many occasions during holidays from work.
In 1987, time caught up with 90 Wardour Street. A commission undertook a study of the premises and discovered that years of loud music had caused the facade of the building to slip towards the pavement. The last gig there was by Joe Satriani on 18th July 1988. The building was demolished , and it's place was occupied by a restaurant last time I ventured down Wardour Street. The Marquee re-opened in Charing Cross Road in the Summer of '88 and stayed put for 7 years. During that time, I took in several gigs there but it was simply not the same. Since then, The Marquee has re-appeared at several London locations and, at the moment, has ceased to exist. Apart from Charing X, I never bothered to seek it out. For me, it was over.
Posted by Steve Langton at 09:43