Theatre Review: The Woman In Black 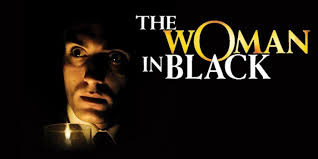 Fact. Old fashioned ghost stories are few and far between these days, and haunted house junkies are often forced to reach for well-thumbed blasts from the past in order to get a regular fright-filled fix. Stories by M.R. James, Shirley Jackson and Peter Straub have kept me awake on many occasions during the wee small hours, and I'd nominate Susan Hill as my current chairperson of the 'Sleep Deprivation Society'. THE WOMAN IN BLACK is an atmospheric chiller that never fails to unnerve me, demonstrating the written word can often be as powerful as the moving image. This terrifying story centres on a young solicitor named Arthur Kipps, who is instructed to attend the funeral of one Alice Drablow. Kipps takes the train to the town of Crythin Gifford, intending to carry out a speedy appraisal of her private papers and return to his London firm with all relevant documents. 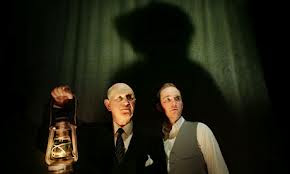 Situated on the bleached salt marsh beyond Nine Lives Causeway, Drablow's Eel Marsh House can only be reached by crossing the causeway at low tide, and Kipps soon discovers the place is given a wide berth by the locals. Arthur tries to break the villager's wall of silence, but ultimately finds their fear to be something more than superstitious nonsense. Who is 'The Woman In Black', and how does she relate to a tragic event which claimed the lives of three people many years earlier? 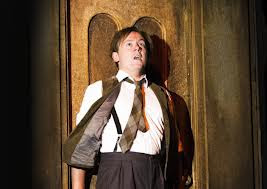 THE WOMAN IN BLACK has entered a record breaking 18th year at London's Fortune theatre with the show also playing intermittently on a regional basis, drawing lavish praise from audience and critics alike. Even so, I harboured grave doubts this powerful story would successfully translate to the stage. Surprisingly, the opening minutes are high on chuckles and low on chills. Ian Lindsay took the role of Arthur Kipps who enlists the help of a young actor (Ian Targett) in order to prepare for the opening night of a play. Kipps believes that reliving his nightmare in the company of strangers is the only way to exorcise The Woman In Black. Right from the word go, Lindsay and Targett gel perfectly as the actor berates for his clumsy interpretation of Hill's wonderful opening paragraphs. At times, their witty repartee verges on downright hilarious but guys, if Susan says it's a long corridor than it most assuredly is! Yes, that memorable first page will never read the same again, but the humour does work. Witness the scene where Kipps enquires how a stage play could accommodate all the key elements of the book. This was actually a brave move on writer Stephen Mallatratt's part, raising questions that must have been in the minds of many theatre-goers. Once again, this double-act had us in stitches, this time introducing a series of props and sound effects which represented Kipps' train journey and that eerie pony and trap ride across the Nine Lives Causeway. Targett added that audiences would certainly use their imaginations, and that was made easy by the sheer quality of the production. Thanks to Kevin Sleep's superb lighting and Michael Holt's excellent design work, The Playhouse stage became Eel Marsh House; the haunted nursery in particular truly living up to Hill's blood-curdling description. Ron Mead's sound design was also top-notch, joining hands with some spooky visuals that made the audience jump out of their skins on several occasions. This is certainly not a play for the faint-hearted. It frequently succeeds in recreating the heart-stopping terror of the novel, and the vein of humour running through this production ensures that when the shocks occur, they hit home with considerable force. Robin Herford did a fine job as director, and must have found the two Ian's to be a joy to work with.

Lindsay does relinquish his Kips character fairly early in the play, and treats us to colorful interpretations of some pretty sedate literary characters: Drablow's financial agent (Mr. Jerome), a wealthy landowner (Samuel Daily) and the valiant Keckwick who knows better than anyone the terrible truth about Eel Marsh House. Susan Hill's creations are all present and correct, and I roared with laughter at Lindsay's portrayal of, sniff, Tomes the clerk. While Lindsay is busy livening up the population of Crythin, Targett puts himself in Arthur Kipps' shoes, giving a lively performance that never falters. There are times when his exuberance enters the realms of over-acting but his enthusiasm was so contagious, it was hard not to get carried along with him. So far, I've name checked most of the cast and crew but what about you-know-who? Did The Woman In Black appear? Well, I hate to break it to you but Lindsay and Targett were the only actors in this production, and a quick perusal of the programme and front-of-house-stills confirmed this. It seemed that the ghostly lady is confined to the pages of Hill's novel, though I could have sworn that on 3 occasions I saw....... maybe not. Maybe I should put it down to over-imagination. It was that kind of night.

n 1989, the ITV channel screened a television production of THE WOMAN IN BLACK on Christmas Eve. This television drama was directed by Herbert Wise, and Nigel Kneale adapted the story from Hill's novel. On (admittedly) a single viewing, I have to say the TV drama didn't really hit the spot for me with perhaps a few changes too many when compared to the book. However, I attended, some years later, a screening of THE STONE TAPE at London's National Film Theatre and Nigel Kneale was on hand to do an enjoyable Q&A and also screen clips from several films. THE WOMAN IN BLACK was one of them and I have to say the clip shown was enough to give me nightmares later that night. Universal now hold the rights to this drama and it seems unlikely the film will be released on DVD anytime soon. It is easy to find copies on Ebay but, as these copies are illegal, I'm sure none of us would even dream of purchasing one.

Email ThisBlogThis!Share to TwitterShare to FacebookShare to Pinterest
Labels: The Woman In Black