My memories of ace guitarist John McGeoch go back a long way. January 1978 to be exact, when a band called Magazine released a stunning debut single, SHOT BY BOTH SIDES. McGeoch was born 28th May 1955 in Renfrewshire. He purchased his first guitar at the age of 12, en route to a career that saw him labeled as 'The Punk Jimmy Page'. He moved to London in 1971 with his family, though his stay was relatively short. In 1976, his love of art took him to Manchester where he studied at the local university. One year later, McGeoch met Howard Devoto who was on the lookout for a guitarist. Devoto had just left The Buzzcocks, and wanted to form a band who would be different to the current crop of young pretenders .With fellow members Barry Adamson, Bob Dickinson and Martin Jackson, Devoto got what he was looking for in Magazine and the aforementioned debut single delivered a stunning declaration of intent. That same year, the bands debut album, REAL LIFE came out, with tracks such as MOTORCADE, THE LIGHT POURS OUT OF ME and TOUCH AND GO merging McGeoch's wonderfully inventive guitar sound with Devoto's disintinctive vocal style. McGeoch was still in the middle of his studies when the album came out and with a tour beckoning, he decided to put his uni work on hold and throw himself into the music. In 1979, Magazine released their second album, SECONDHAND DAYLIGHT, exhibiting a slightly mellower sound but still delivering the sort of killer tracks that would retain their loyal following. From Devoto's evil vocals on PERMAFROST through to the majestic FEED THE ENEMY and BACK TO NATURE, this follow-up album really did give us everything, with McGeoch's contribution even more assured and exciting. 1980 saw McGeoch play on the bands 3rd album, THE CORRECT USE OF SOAP, with songs like SWEETHEART CONTRACT and THE LIGHT POURS OUT OF ME further cementing the bands reputation. Shortly after this albums release, McGeoch left the band and joined Steve Strange's VISAGE. McGeoch had worked with Strange and other bands such as The Skids as a 'gun for hire' during his time with Devoto but began to long for things he could never get in Magazine.


n 1979, John McKay, together with drummer Kenny Morris, had walked out on SIOUXSIE AND THE BANSHEES, and Sioux started to look for a replacement. Bassist Steve Severin had considered Geordie from Killing Joke or Bruce Gilbert from Wire, before enlisting the services of The Cure's Robert Smith on a temporary basis. Before long, McGeoch was invited to rehearsals and laid down a wonderful guitar track on the HAPPY HOUSE single before making his live Banshees debut in March 1980. John had seen the welcome sign and knew this would be his new home for a while. As a long-standing fan of the Banshee's debut album THE SCREAM, I have to say that McGeoch's time with the group saw them release their most creative work. KALEIDOSCOPE (1980) JUJU (1981) and A KISS IN THE DREAMHOUSE (1982) still hold up today as, I believe, their very best work and McGeoch's sterling endeavours also enabled them to really catch fire live. Siouxsie had long yearned for a guitarist with a truly cinematic style and in McGeoch, she had her man, referring to him as her own John Barry. Indeed, his unique style really established the Banshees as a top singles band and for a while, they matched THE JAM as one of the greatest purveyors of the 45 our country has known. HAPPY HOUSE, CHRISTINE, the anthemic ISRAEL and SPELLBOUND all helped to stamp the Banshees with the mark of true greatness. Sadly, McGeoch had health issues which led to him collapsing at a concert in Madrid and he left the band for a two year stint with Richard Jobson's THE ARMOURY SHOW. In 1986, McGeoch joined PUBLIC IMAGE LTD, attracting Lydon's keen eye for top musicians. PIL had always contained men at the top of their trade (Wobble, Levene and Baker) and this was a natural progression, particularly as McGeoch had turned down a similar offer from Lydon a few years earlier. John Played on 3 albums in his time with PIL, and stayed until the bands demise in 1992. After that, he drifted, switching from training as a nurse to composing music for TV shows.

I was privileged to see McGeoch play live on many occasions, with Magazine, Siouxsie And The Banshees and PIL. My first glimpse of his talents came at a gig at Derby's Ajanta Theatre in 1978 which provided me with the chance to see an emerging band who would eventually become one of my favourites. One year later, I was there at Birmingham's Odeon Theatre to see Devoto and his band support SIMPLE MINDS. I'd never been a fan of the latter, but the chance to see MAGAZINE promoting their SECONDHAND DAYLIGHT album was too good to miss. To be honest, I sat through most of SIMPLE MIND's set in a daze, constantly going over MAGAZINE's performance where McGeoch just kept laying down his own brand of magic, while Devoto plucked his words out of the air clearly relishing every chord. In many ways, my most memorable times with this hugely talented guitarist came during his stint with the Banshees. I'd seen them with Kenny Morris and Robert Smith (the latter being a supremely gifted player), but with McGeoch on board, their live shows were this side of heaven. My final live encounter with this legend came at Nottingham Rock City, where PUBLIC IMAGE LTD played a gig with the house lights on for the duration (only the second concert I've ever seen this happen at). It was so good to finally see Lydon onstage and the presence of McGeoch ( a huge admirer of Lydon) was immense. The band ended with a glorious encore of ANARCHY IN THE UK and that was the last time I saw this great artist.

John McGeoch died in his sleep on 4th March 2004. He was my favourite guitarist, and undoubtedly one of the best in recent times. I think that everyone leaves something behind when they depart this world for the next. Something unique that enables those left behind to remember them by. John McGeoch left us with some truly wonderful music that will still be here when the rest of us are long gone. Thanks for the memories, John. 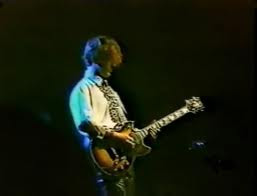 Email ThisBlogThis!Share to TwitterShare to FacebookShare to Pinterest
Labels: John McGeoch, Magazine, Siouxsie And The Banshees