Blu-ray Review: Pit And The Pendulum 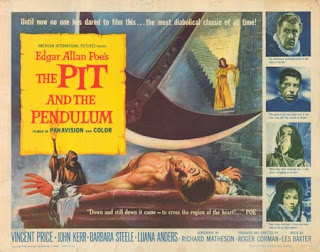 Made in 1961, Roger Corman's 'Pit And The Pendulum' was shot on a budget of $270,000; $50,000 of which went to Vincent Price who turns in a gem of a performance as Nicholas Medina. A Spanish castle is the setting for this wonderfully atmospheric take on Edgar Allan Poe's story, as Francis Barnard (John Kerr) arrives in search of the truth regarding the death of his sister Elizabeth, played by Barbara Steele. Elizabeth died at the age of 29, and the cause of her untimely demise lie within the castle walls, and can only be conveyed by Nicholas, his sister Catherine (Luana Anders) and family physician Dr Leon (Antony Carbone). The initial explanation that Elizabeth died from "something in her blood" proves wholly unsatisfactory, and Barnard resolves to uncover the truth come what may. His quest is punctuated with flashback sequences containing fragments from the tortured past of Nicholas, who is locked in a public world of grief over Elizabeth's passing and who believes she has returned from the grave to wreak vengeance. Certainly, the strains of music coming from the harpsichord she so loved to play suggests her unquiet spirit resides in the castle. 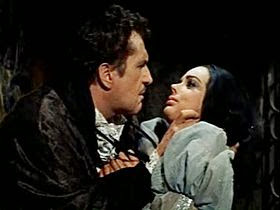 Corman's film essentially plays out in three acts, with the third based on Poe's story which would have proved insufficient to fill and 80 minute feature. Richard Matheson did a fine job with the screenplay, which presented a considerable challenge and one he rose to admirably, throwing a dose of Freudian angst into the mix by painting a lurid picture of Nicholas' father whose personality will reach out to the living in a terrific final act. Matheson's work here is exceptional, and the same can be said for the art department and effects work, along with the skills of DOP Floyd Crosby. Those beautiful matte paintings, sumptuous set designs and macabre splendour of the halls and passageways really do make this film a feast for the eyes, while the cast - particularly Vincent Price - step off the pages of Matheson's script and mostly deliver. It's true that some reviewers have charged Price with a hammy, over-the-top performance, but I feel this is unfair as the range of emotions demanded by his two roles are perfectly conveyed.For me, John Kerr's performance is the odd one out, though I have tuned in a little better to his turn down the years. 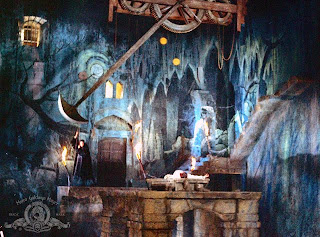 'Pit And The Pendulum' is one of those films that induces a warm glow with each viewing. It's delights are many, and guarantees repayment of the admission fee tenfold; not least for a scene that culminates in one of the shock moments in horror film history. 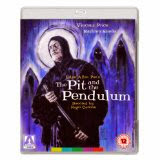 Arrow Video chose well when adding Corman's film to its ever-expanding Blu-ray catalogue. Here, the intricate designs, fabulous sets and top-notch photography really do come alive in a transfer that illustrates the talent at the director's command. Fleshtones are particularly strong - Barbara Steele in particular looks amazing - and a fine Les Baxter score plays out in the original uncompressed mono PCM audio: Baxter's score can also be enjoyed in an isolated music and effects track. With sound and vision admirably catered for, Arrow have gone a few extra miles by adding some valuable supplementary material. First off is a Roger Corman commentary track, where Roger recalls the 14 day shoot, fleshes out the differences between Pit and its predecessor 'The Fall Of The House Of Usher' and chats about William Castle, Hammer Films and his admiration for Vincent Price. He explains why some of his directorial choices were designed to unsettle rather than shock, and of the techniques employed to give his film greater depth. It's a rewarding talk, which is followed by a commentary track from Tim Lucas: editor of 'Video Watchdog' magazine and author of the weighty Mario Bava tome which is the finest book on film you'll ever read. Tim begins by reading aloud Matheson's voice-over from his script, and goes on to take us through the effects work, explaining who did what and pays tribute to key participants, including Les Baxter whose score, Tim believes, represents his best work for AIP. We also get the lowdown on Luana Anders' connection to Jack Nicholson; references to Dario Argento's 'Trauma' and 'The Horrible Dr Hichcock' and a wonderful statement that "The house is a layered map of Medina's mind". Tim's commentary track was recorded on the 205th anniversary of Poe's birth. Watch the film, listen to this commentary and watch the film again with fresh eyes. 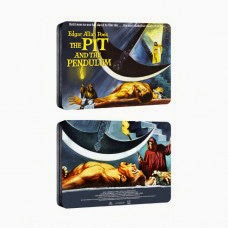 Next on the agenda is 'The Story Behind The Swinging Blade': a 43 minute High Rising Productions feature, containing video contributions from Roger Corman, Barbara Steele, Vincent's engaging daughter Victoria, Brain Yuzna and David Del Valle. Corman chats about 'Pit' and 'Usher'; why he chose Richard Matheson to write the screenplay and has a delightful story to tell about John Kerr and the pendulum. Barbara Steele holds forth about her relationship onset with Vincent Price and has excellent recall of the shoot, while Victoria Price is a joy to listen to with her stories about her late father. There's also good input from Brain Yuzna and David Del Valle who sets out Price's legacy in exquisitely moving terms. 'An Evening Of Edgar Allan Poe' follows, being a 53 minute made for TV production from 1970. 'Evening' is a one-man show starring Vincent Price and taking in a quartet of Poe stories:'The Tell Tale Heart', 'The Sphinx', 'The Cask Of Amontillado' and 'Pit And The Pendulum'. Price's performances convey the tortured genius at the dark heart of Poe's work, creating a charged atmosphere of dread. My own favourite - 'The Tell Tale Heart' - is set in the quiet, desolate hours of the night and works supremely well; do watch out for the scene where a crazed Price takes up the floorboards and reaches inside, his hands slowly emerging, clutching .....
'Evening' appeared on the American DVD of 'Tomb Of Ligeia' and is a nice bonus feature here.
A 5 minute added television sequence follows, shot in 1968 when this film was sold to television and found to be too short for its two hour time slot. Luana Anders was the only cast member available, and appears here telling her story in an asylum. Tim Lucas notes in his commentary that Anders, seven years on, seems a better actress and it's a good point.
The original theatrical trailer rounds things off as far as the disc is concerned, but Arrow Video have included a booklet contains photographs, notes about the transfer and a Jonathan Rigby essay titled 'The Waiting Pit Of Hell'. Jonathan's piece provides an excellent overview of production history, its influence on other films and concludes by recognising its place as "an enduring Gothic masterwork".

'Pit And The Pendulum' is available to buy now, and you can choose between a standard Blu-ray or a nifty steelbook. For sure, this will find its way on to many 'Best Of The Year' lists.
Posted by Steve Langton at 01:37