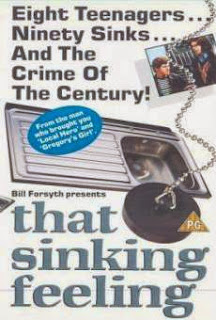 Bill Forsyth's 1980 film actually made the Guinness Book Of Recordsas the lowest budget for a feature film - when adjusted for inflation - weighing in at just under £5,000.
'That Sinking Feeling' is set in Glasgow, back in the days when a coffee and burger would set you back 45p, Ronnie Munro (Robert Buchanan)is a keen supporter of unhealthy eating, being one of the city's downtrodden youth, short on cash and hope.
Suicide with cornflakes and milk is just one example of the gallows humour shared by Ronnie and his band of merry men, who are all looking for a way out of their humdrum existence. During one of his aimless walks through the city, Ronnie sees the answer to his prayers: a shop window display featuring a kitchen sink priced at £60. Suddenly, Ronnie's entreprenurial spirit kicks in, and he summons a meeting with his pals, eager to unveil an exciting business opportunity.'There's brass in steel' is the message here, with the local warehouse and its stock of kitchen sinks being the object of Ronnie's attention. 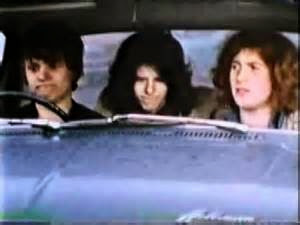 Soon, plans are laid, confederates are briefed and discreet meetings take place, including a hilarious conference on a boat in the middle of a lake!
Taken at face value, Ronnie's accomplices are a motley crew indeed, with young children enlisted to participate in this crime of the century and often possessing more savvy than their peers. Still, the plan - which includes drugging the driver of a firm's van to be used as a storage and getaway van - doess indeed get them into the factory where the lecherous night watchman prances and dances with two cross-dressing members of the Munro firm.
'That Sinking Feeling' certainly scores highly in terms of comedic value, but its concern regarding the plight of the disenfranchised adds a nice balance and the film works beautifully as a result. 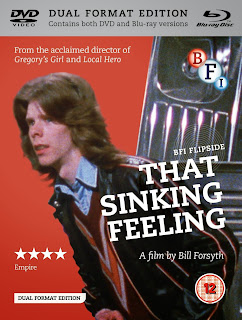 The BFI's 'Flipside' series has restored some real gems to our screens, so it's particularly pleasing to report that Bill's film is now the subject of a fully loaded dual format Blu-ray/DVD release on this enterprising label.

Picture quality was never going to be pristine, given the ultra low budget shoot, but it's a huge improvement on the previous release and is sure to please fans of this film. 'That Sinking Feeling' is presented in its original aspect ratio of 1.33:1, with digital restoration tools used to reduce film defects such as splice damage, negative sparkle and broken frames. It was transferred from a 35mm low-contrast element held by the BFI, whcih was struck from an original 16mm element. The grain adds hugely to the atmosphere, and the picture exhibits good detail. The previously bastardised dialogue has been returned to the Glaswegian twang that helps make this film so special, and comes with optional Hard Of Hearing subtitles so those who live abroad and are perhaps unfamiliar with the accent can follow proceedings every step of the way.
The extras begin with a Bill Forsyth commentary track, moderated by Mark Kermode. Bill explains he had written a draft of 'Gregory's Girl' before he shot 'That Sinking Feeling' and that his film was based on Ronnie's bad dream. We get to hear about the challenges of shooting on a miniscule budget; how the shoot was a bit like going to film school for many of the crew and there's a marvellous moment when Mark gently chides Bill for his film's Sci-Fi turn - "What were you thinking of Bill?"It really is the kind of commentary track that you'll want to return to for background and anecdotes (did you spot PC Milk Bottle Top?) and it's followed by a string of short films that sustain interest throughout. 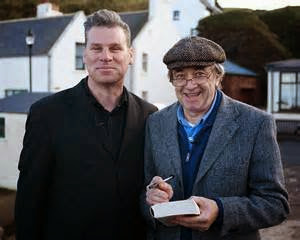 KH-4 (1969) runs for 12m 41s and was directed by John Schorstein. Here, Forsyth plays a young artist, taking us on a journey through streets and high rise blocks with demolition rubble strewn along the way. The artist's struggle to gain inspiration from the changing landscape is highlighted, with compelling visuals lending a poetic quality to proceedings.
Next up is 'Mirror' (1970), running for 33m 34s and again directed by Schorstein. Bill Forsyth plays a young writer searching Glasgow for his missing girlfriend. As a voice waiting to be heard,the character of Geoff will stay with you long after the credits roll, making this a valuable addition to the package.

'Glasgow 1980' (1971) runs for 30m 46s and is a documentary edited by Bill promoting the proposed redevelopment of Glasgow in the 1970s. Here, the rise in population, pollution, social problems and cramped living conditions are all addressed, with open space planning and improved planning part of the drive for change.

'Islands Of The West' (1972) is a 27m 29s promotional short where Bill Forsyth captures the scenic beauty of the Scottish Hebrides, with the island community working together to export tweed, shrimp and lobsters to the world outside. It's an area dominated by the sky, but Forsyth's camera - while capturing wonderful landscape - also takes us under the skin of what lies beneath the clouds with insight and affection.

'Bill Forsyth BAFTA Film' (2012) is a 7m 9s piece, being a humorous short acceptance film made for BAFTA. This covers his early days filming anything that moved in words and pictures, and shows the editing process using a 'hot foot' splicer.

'Kermode Uncut' (2012) runs for 9m 20s and includes a begging letter Forsyth sent out to various companies in the hope they'd contribute towards the funding of his film; the original budget scribbled down on the back of an envelope and an important piece of advice to all budding filmmakers: "Stay hungry!"

This BFI release also includes an illustrated booklet, with essays from David Archibald and Douglas Weir that will increase your appreciation of the film, together with background info on the main feature and the shorts.
It's a beautifully assembled package, offering value for money that far exceeds the asking price. It's available to buy from 21st April 2014, and the good news for interested parties abroad is it's Region-Free.
Posted by Steve Langton at 06:34