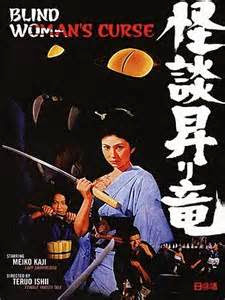 Until around 10 years ago, Japanese director Teruo Ishii was regarded as a hack, but I'd strike a comparison between Ishii and Spanish maestro Jesus Franco; both of whom had an impressive strike rate when it comes to the sheer volume of releases, and a willingness to explore a wide range of genres.

'Blind Woman's Curse' was made in 1970, and was a studio film for the Nikkatsu studio. Interestingly, it's one of only two horror films they made and here, the men in suits ordered Ishii to incorporate supernatural elements. So, the film became a 'Bakeneko'; a sub-genre which features ghost cats. In this particular case, the spirit of the feline licks the blood of a Yakuza gangleader's sister who is slashed across the eyes by the sword of Akemi (Meiko Kaji); member of a rival gang who will spend three years in jail. Upon release, Akemi is head of the clan, having replaced her late father in the Tachibana gang, but soon faces warfare with the Aozora gang who are intent in taking new territory.
Akemi is served by a team of Yakuza girls whose back tattoos form a dragon when assembled in line for conflict, but the presence of a beautiful blind swordswoman and a demented hunchback (Tatsumi Hijikata) result in a string of dead bodies, each with their tattoo carved off and bearing a note declaring the slayings will continue.

Ishii himself has described this film as nonsensical and, in places, that's a pretty fair description. However, taken overall, 'Blind Woman's Curse' emerges as a thoroughly entertaining piece, with a multitude of stand-out scenes: check out the fairground tent that plays host to a collection of wax heads - one of which is most definitely alive - a device later employed by Mario Bava in 'Baron Blood' (1972), and there are several beautifully choreographed fight scenes where blood is sprayed in a delightfully liberal fashion. 'Blind Woman's Curse' fully justifies its place amongst Arrow's consistently impressive catalogue of releases; not least, as it's a chance to savour Meiko Kaji in all her glory. While its true that Kaji is sidelined for a fair amount of the film, her screen time makes up for this and it doesn't unduly matter, given the breakneck pace and mischievous directorial flourishes that take centre stage.
I've mentioned Kaji who has great screen presence, but Choki Tokuda also scores highly as the blind swordswoman from the Goda gang whose charcter takes an almost hypnotic hold on the senses as she turns up as an angel of death at various points in the film. 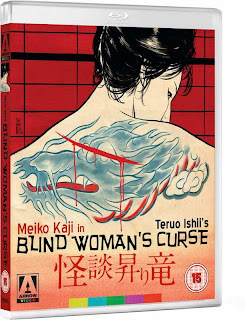 Arrow Video's Blu-ray contains a transfer that compliments the garish colours that are often on display, with a high level of detail, strong black levels and also a softness in certain scenes that is clearly faithful to the original.

Trailers for the main feature and 4 trailers for the soon-come 'Stray Cat Rock' series of films are also included, together with an excellent commentary track from Jasper Sharp, writer and also co-founder of the Midnight Eye' website. Jasper is a wonderfully informed expert on Japanese films and here delivers concise information on the cast, production details, as well as the lowdown on Nikkatsu studios and other film companies of note.
Arrow have once again included a booklet with this release, containing photos and an absorbing essay from Japanese film expert Tom Mes which discusses both the film and its director who is known as 'The King Of Cult'

'Blind Woman's Curse' is out now, and is locked to Region B.
Posted by Steve Langton at 07:33