For the BBC, 1972 would prove to be a classic year of small screen Horror gems. Fans of classic ghost stories thrilled to their adaptation of M.R.James' A Warning To The Curious and Peter Sasdy's Nigel Kneale penned The Stone Tape. Dead Of Night was originally seven 50 minute stories but, alas, four of the tales were wiped. Now, The BFI have released the three surviving episodes on one DVD, and kick off with one of the most unnerving slices of television drama ever transmitted. 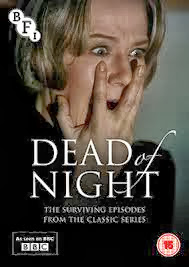 First broadcast on 5th November 1972, Don Taylor's The Exorcism places two couples in a restored cottage, aiming to celebrate Christmas with an abundance of food and drink. Edmund and Rachel (Edward Petherbridge, Anna Cropper) welcome Dan and Margaret (Clive Swift, Sylvia Kay) to their home and the men's conversation soon turns to the subject of money and how they should not feel guilty about their wealth. So far, so middle-class, and this cosy gathering get a taste of things to come when Rachel plays a tune on her clavichord and becomes extremely nervous, claiming she's never heard this piece before. When dinner is served, events really take a nasty turn for the worse when Edmund declares the wine to taste of blood, and their first mouthfuls of food have a burning nauseous effect on all four members of this well-to-do group. Add to this a mysterious loss of power, Rachel's vision of a child's skeleton in the bedroom upstairs and doors that won't open, windows that refuse to break mean the quartet are stranded with no way out and can only wait to discover the awful truth that will soon come to the surface. Here, the land of plenty becomes a barren wasteland, as past events return to haunt the living with a terrible vengeance. I was lucky(?) enough to witness the small-screen debut of The Exorcism and the screening damn near ruined Xmas for me later that year, with an extraordinary turn from Anna Cropper (who also appears in Robin Redbreast) staying with me for many long months after, and leading to the most downbeat of endings. This Holy Grail of tv terror has stood the test of time so very well, and will now greatly disturb a whole new generation of viewers. It's interesting to note that Cropper took over the lead role in the West End play of The Exorcism when Mary Ure dies of an overdose the day after the opening night.

Return Flight is the next episode on offer, and concerns one Hamish Rolph (Peter Barkworth); a recently widowed pilot who is hauled in by his superiors to explain his sighting of an unidentified aircraft with no navigation lights. The problem is, air traffic control recorded no other plane within an eight mile radius. Although Return Flight is possibly the least of this trio of tales, it does leave its mark; especially when we learn the first husband of Rolph's wife was killed in a bombing mission. Rolph's wish to move on with his life, coupled with professional and personal insecurities are beautifully drawn with a strong performance from Barkworth, and the script - penned by Robert Holmes - leaves one with an awful lot to consider. Return Flight was first screened on 12th November 1972.

The final episode, A Woman Sobbing, was first broadcast on 17th December 1972 and stars Anna Massey as Jane - a housewife kept awake by the sound of a woman sobbing in her attic during the hours of darkness. Husband Frank (Ronald Hines) can hear nothing of these deeply unsettling nocturnal events, and Jane's sanity is called into question by her husband and his friend Sandy (Julian Holloway). With their meagre sex life bubbling away in the background (sometimes foreground), the couple are gradually drawn apart leaving Jane very much alone in her battle with a perceived supernatural entity. A Woman Sobbing is a wonderfully understated chiller, using sound rather than vision to install an overwhelming sense of dread that could well come from the mind or from another world. Paul Ciappessoni's direction is finely tuned to John Bowen's script, and their collaboration really gets under the skin to leave a lasting impression: do listen out for the line, "Where'd you get the holy water from, duckie?" - the malevolent voice uttering that line stayed with for years after.

It's a genuine cause for regret that over half of the Dead Of Night episodes are no longer available, but this BFI DVD does include a gallery of stills from two of the missing episodes and there's a PDF of downloadable scripts for the four episodes that were wiped. The DVD also includes a booklet featuring beautifully written overviews from Lisa Kerrigan.This DVD is released form the BFI on 28th October, and is an essential purchase for devotees of uneasy viewing.
Posted by Steve Langton at 06:02