Picture, if you will, a cold December evening. Outside, a thin layer of snow has formed over the expansive lawns of a college. Inside, a small gathering of students take their seats in a candlelit room waiting for M.R. James to begin reading a slection of his classic ghost stories, Montague Rhodes James - 1863-1936 - was a medieval scholar who enjoyed a distinguished career, and wrote ghost stories in his spare time for friends and colleagues to enjoy. His terrifying tales - often involving a scholar who unwittingly invokes supernatural horrors- have thrilled generations of readers who demand atmospheric chillers that leave you constantly jumping at the slightest sound or movement in a half-lit room. 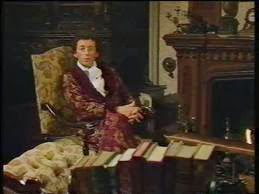 In 1986, the BBC screened Classic Ghost Stories on 25th, 26th, 28th, 29th and 30th December, with renowned actor Robert Powell filling the role of M.R. James. Here, Powell tells five of James' ghost stories from the confines of a study, using his wealth of experience to convey the absolute dread that legions of fans have experienced when reading the books.The first tale is 'The Mezzotint', which involves a university scholar on the lookout for topographical drawings to add to his employers collection. An ordinary (on the surface, at least) drawing is sent for his perusal, depicting a view of a manor house, the identity of which is unknown. Before long, this unremarkable work of art begins to change with a figure appearing on the boundary of the lawn. Overnight, the Mezzotint continues its terrifying downwards spiral as the mysterious figure has moved closer to the house. Is this heading towards a tragedy about to unfold, or has it already taken place? 'The Mezzotint' is, for my money, one of James' finest tales and 'The Ash Tree' - the 2nd ghost story in this collection - is just as essential. Suffolk is the setting as the 1690 Castringham witch trials reach into the present day. Something terrible resides in a huge ash tree, and a number of unexplained deaths can be traced back to a convicted witch's forecast that "there will be guests at the hall". With a finale that will surely turn your stomach, 'The Ash Tree' is bone-chilling fare indeed, and is followed by 'Wailing Well'. Here, two boy scouts are strongly dissuaded from entering a red-ringed field that local legend has placed 'out of bounds'. One of the boys ignores these grave warnings and encounters a trio of other-wordly beings who were characters of ill-repute during their former lives.The famous 'Oh Whistle, And I'll Come To You, My Lad' is the next story on offer here, featuring a college professor who takes a short vacation in order to improve his game of golf, and also to check out local sites of interest. Professor Perkins had been asked by a friend to visit the site of a Templar preceptory, and unearths an ancient whistle; a discovery that inspires a ghostly presence to claim it back. 'Whistle' is a prime example of James' ability to place his audience in a world of academia where strange forces hold sway, gradually building an atmosphere of fear and loathing that will set your nerves a-jangling. The final story is 'The Rose Garden', involving the haunted site of an old summer house set in Westfield Hall, Essex, where a gardening project is directed towards the aforementioned piece of land. Soon, horrifying nightmares of past events are accompanied by sight and sound that relate to the death of a disgraced Lord Chief Justice. This is a subtle, remarkably effective tale that amrks the end of Powell's involvement. James' stories are beautifully read by Powell, who uses books, manuscripts and letters to add colour to proceedings which also benefit from the use of dramatisation during some of the stories. It's a genuine pleasure to view once again these very special broadcasts, and immensely pleasing to discover The BFI has added three stories from the 'Spine Chillers' series to their DVD. 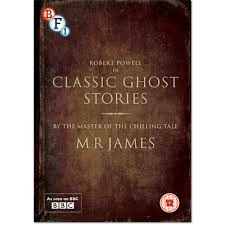 The 'Spine Chillers' series contained readings from major writers including James and HG wells, and was broadcast by the BBC in 1980. Here, Michael Bryant takes on the role of James and begins with a reading of 'The Mezzotint', which contains a different edit to Powell's version. 'A School Story' is next on the bill. This wonderfully chilling piece concerns two men talking about their schooldays, and involves some extremely unsettling classroom experiences. The final story, 'The Diary Of Mr Poynter', sees a book auction lead to the pruchase of four volumes written by the titular character. A piece of cloth is found in one of the diaries, which becomes the pattern for new curtains. Of course, subsequent events prove this to be a wholly unfortunate decision as, once again,the past returns to haunt the living. Bryant is admirable in his role of the famous writer, and this generous extra feature gives real added value to this essential purchase for lovers of tales well told. The BFI have also included an informative booklet with essays on the tv series. Perfect uneasy viewing for cold winters evenings, this BFI DVD is released on 28th October.
Posted by Steve Langton at 11:13