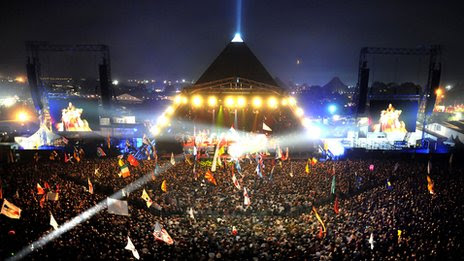 " It's that time of the year again! Today, 180,000 music fans converged on Glastonbury in England for the annual outdoor music festival. Last year, the festival didn't take place because the organisers wanted the 900,000 acre field to recover for a year, but this year it's back with some great bands lined up."

"The festival first took place in 1970 on the day after the death of Jimi Hendrix, over a 2 day period. Artists included Marc Bolan and Al Stewart, and admission was just £1 with 1500 people attending. The following year included gigs by David Bowie, Joan Baez, Hawkwind and Fairport Convention, with a crowd of 12,000. The site of the festival is of particular interest: the venue, Worthy Farm, is overlooked by Glastonbury Tor. The area has a number of legends and is a New Age site of interest as ley lines are believed to converge on the Tor. Since 1981, the event has been organised by local farmer Michael Eavis who recently handed over the reins to daughter Emily. There are several stages, and the sound systems on site have a total power of over 650,000 watts. Most of the festival goers choose to camp out for the duration, and there are several fields to accommodate campers."

"This years line-up promises great things with The Rolling Stones headlining Saturday night on the famous Pyramid stage, while The Arctic Monkeys, Public Image Ltd, Elvis Costello, Billy Bragg, Tom Tom Club, Primal Scream, Nick Cave And The Bad Seeds, The Vaccines and Mumford And Sons are just a few of the quality acts lined up. With the BBC set to offer their most comprehensive coverage yet, the world's longest running music festival looks to be another winner!"

Email ThisBlogThis!Share to TwitterShare to FacebookShare to Pinterest
Labels: Glastonbury