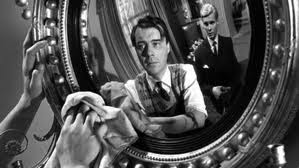 "Released in 1963, The Servant marks the first collaboration between director Joseph Losey and Harold Pinter, who wrote the screenplay and also appears in the film. The Servant is set in a Chelsea townhouse where a 23 year old James Fox plays an aristocrat named Tony who dreams of building cities in the jungle; lofty ideas from a dreamer who appears to spend his days and nights avoiding even the suggestion of real work. Such a lifestyle almost demands a manservant and Hugo Barrett (Dirk Bogarde) is duly appointed to cook for and generally look after his new employee. Barrett is already well versed in the art of attending to every whim and, for a while, seems to be a dream come true: the sort of man who is only too happy to serve and obey, and who sees his job as a vocation rather than just another way to put food on the table. Soon, however, the situation changes. Even before an angry altercation outside a phone booth ("Get out of the way, you filthy bitch!"), we see Barrett's character gradually change, en route to attempting to become the new master of the house. Throw into the mix Tony's fiancee Susan (Wendy Craig) and Barrett's fiancee Susan (a sultry Sarah Miles) posing as his sister, and we have a volatile four-hander containing some frankly terrific performances. It's entirely fascinating to watch the balance of power shift several times, as relationships shatter and attempt to regroup with life-changing consequences for the quartet. "

"It's all too rare for a film to attain perfection, but The Servant manages to achieve this. From Pinter's script, Losey's brilliant direction, Douglas Slocombe's cinemaphotography, the outstanding performances to Johnny Dankworth's score.... all examples of artists at the evry top of their game, and it's gratifying to see Studio Canal's Blu-Ray bestow such reverential treatment on this film."

"First of all, The Servant looks ravishing here, acting as a wonderful showcase for Douglas Slocombe's photography. The transfer exhibits real depth with exquisite detail and no problems to report. There's also a generous amount of extras to enjoy, including interviews with Fox, Craig and Miles who all talk about Losey's style of direction, his (and their own) attitude towards the subject of class differences, and there's a wonderful moment when Miles reveals her parents were mortified when they attended a preview of the film, and feared the family name would be in tatters because of the character she played. We also get the chance to see Stephen Woolley recall his first viewing of The Servant at a tender age, while experts on Bogarde and Pinter discuss the careers and involvement of their specialist subjects. I was also delighted to discover a substantial featurette containing Losey's participation at a panel discussion during the first New York Film Festival in 1963, and there's also an audio interview with Douglas Slocombe and an excellent interview with Harold Pinter. "

" The Servant has lost none of its power down the years, and remains a challenging excursion into the tangled web of the British aristocracy.
Posted by Steve Langton at 06:13