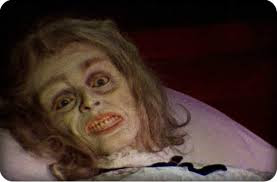 "Mario Bava's I tre volti della paura (The Three Faces Of Fear) horror anthology was released in 1963, and went on to debut in America as Black Sabbath. The two versions have differences in terms of dialogue and music, with AIP toning down and altering material they deemed had pushed the envelope too far. Thanks to Arrow Video's superlative Blu-ray release, we can now enjoy the two versions in high definition."

"In the Italian version, The Telephone kicks things off, with Rosy (Michelle Mercier) receiving a series of malicious calls that appear to be from her former pimp Frank, who has just got out of jail. Instead of calling the police, Rosy calls her former lover Mary (Lydia Alfonsi), terrified that Frank is apparently privy to her every move, even down to her varying states of undress. Although The Telephone is the least of the three stories on offer, it does deliver a fine line in tension, amplifying Bava's premise that fear has stalked mankind throughout all the ages. In the Black Sabbath cut, AIP turned this section into a supernatural tale with Frank reaching out from beyond the grave to wreak vengeance on the living, and omitted any suggestion of a lesbian affair between Rosy and Mary. While I much prefer the Italian version, AIP's cut is well worth a view, and fascinating in its own right."

"The second story in the Italian version is The Wurdalak, starring Mark Damon as young nobleman Vladimir Durfe, whose discovery of a headless corpse leads him to the house of a terrified family who await the return of head of the household Gorca (played by Boris Karloff in his last great role. The Wurdalak of the title refers to a vampiric being who is compelled to drink the blood of those he loves the most. In this Italian version, child abduction is just one of the horrors we must contend with, and the sight and sound of the aforementioned offspring begging to be let into the house because "I'm cold" is one of the genre's most chilling. The Wurdalak really is a remarkable piece of filmmaking, with a fog-shrouded locale, some exquisite lighting and a wonderfully chilling performance from Karloff turning it into the stuff of nightmares."

" The AIP cut placed The Wurdalak as the final story. In the Italian version, it's sandwiched between The Telephone and our final story, The Drop Of Water. Here, Jacqueline Pierreux plays Helen Chester, who is summoned to attend the corpse of a just deceased medium, whose death face will haunt you for many months after. When Chester takes a shine to the medium's ring, that fine line betwixt the living and the dead is once again breached. Here, the Italian and AIP cuts differ in several areas; notably the use of score versus sound effects, and the depiction of Chester as cold hearted in her attitude to the dead. With its sumptuous lighting and haunting other-wordly sound effects, The Drop Of Water is perfectly placed to end this trilogy of terror as a genre gem that remains every bit as frightening as it must have done all those years ago."

"Arrows Blu-ray will surely please admirers of this film,with a pleasing transfer. Both transfers exhibit some inherited minor wear, but depth and detail are good as well as colour reproduction. On the extras front, Bava-ites will enjoy Tim Lucas' commentary track which provides valuable career resumes of the cast, and insight and interpretation with regard to the visual and thematic information on offer. Tim was also involved with the excellent 'Twice The Fear' featurette which uses split-screen to examine the major differences between the two versions. It's a fascinating 32 minutes, taking each segment and highlighting variations in music, dialogue, sound effects and footage. One particularly interesting aspect is the score. Roberto Nicolosi did the honours for the Italian version, while Les Baxter scored the AIP version. I have to give the thumbs up to Nicolosi here, who knew when to let the music fade and the sound effects take over. See what you think. There are also trailers to enjoy, a terrific 40 page booklet (featuring a Samuel Z. Arkoff interview,and writing by Tim Lucas and David Cairns), a video introduction by Alan Jones and a 20 minute Mark Damon interview. Although Damon only mentions in brief his time with Mario Bava, his interview is a total delight with the names of Groucho Marx, Roger Corman and Clint Eastwood popping up."

"Arrow's Blu-ray package is highly recommended and destined to be on many best-of-the-year lists come the end of 2013."