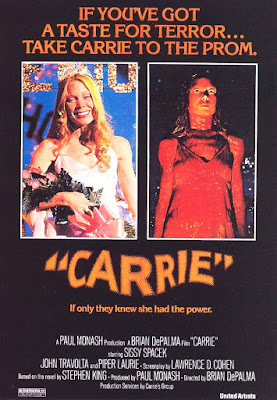 School, the workplace, social media... the reprehensible act of bullying today has more outlets than ever before, making Brian De Palma's "Carrie" particularly relevant in
this day and age.
Meet Carrie White (Sissy Spacek): a put-upon high school girl who lives with her religious zealot mother, Margaret (Piper Laurie), and is a prime example of a troubled teen
who must deal with a motley crew of girls and guys. 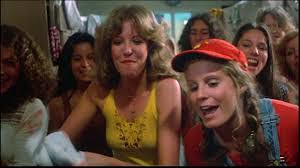 The offending party is headed by Chris Hargensen (Nancy Allen) and Billy Nolan (John Travolta), with PJ Soles and cohorts adding their support to a most unsavory project.
Carrie befriended by PE teacher Miss Collins (Betty Buckley), who takes this troubled girl under her wing as tampons fly during her first period amidst a throng of cat-calling
teens. It's just as well Carrie has an alternative mother figure in her life as support at home is zero, thanks to her domineering mother who prefers Carrie to be shut away from any potential friends and admirers who may introduce her to real life. 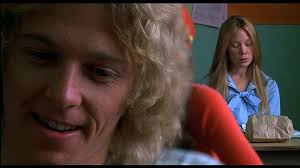 Based on Stephen King's debut novel, De Palma's film cats Sissy Spacek as probably the most naturally beautiful girl in the picture, shy and awkward but with special qualities
to entrance the right suitor.
She also possesses the power to move objects at will; something that's triggered by rage whenever the situation feels threatening to her. Tommy Ross (William Katt) slowly comes to recognise her beauty and her pesonality, when his girlfriend Sue (Amy Irving) persuades him to escort Carrie to the school prom where things go very badly wrong.
The high school shoot is a prime example of De Palma's special brand of filmmaking prowess, beautifully lit with economic use of split-screen photography and tensioncranked up to 11.
The cast - several of whom made their film debuts here - are uniformally excellent, split between the good, the inbetween and the downright ugly, who are all ultimately tarred
by the same brush.
It's certainly a rip-roaring finale, leading up to that famous 'jump' moment that helps make this film such a memorable one. 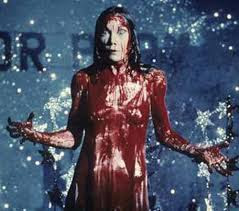 "Carrie" has certainly stood the test of time, emerging as one of the very best King adaptations and a most worthy inclusion in Horror's Hall of Fame. 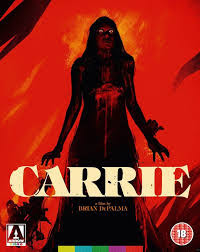 Arrow Video's Blu-ray release unveils a 4k scan that really shows off the intricate lighting with strong, stable colours.
The extras begin with a commentary track from Lee Gambin and Alexandra Heller-Nicholas.
The pair deliver an informative track, taking in critical reception to the film and addressing accusations of De Palma as a misogynist.Lee talks about Piper Laurie - not first choice for the role - and Alexandra goes into the use of space in this film. King's book, the mythological feel to the prom and De Palma's lighting of his female cast members are just a few of the additional things discussed in this enlightening talk.

Next up is "Acting Carrie" (42m 42s)
This is a 2001 featurette, comprising of interviews with De Palma (who calls this film "one of the great cast experiences"), Amy Irving, art director Jack Fisk and others.
Key scenes are discussed, including the prom and shower scenes.
"More Acting Carrie" (20m 19s)
A continuation of the previous featurette, with input from Nancy Allen, Betty Buckley and William Katt who discuss the script, rehearsals and De Palma's energy.
"Visualising Carrie: From words to Images" (41m 33s)
De Palma, scriptwriter Lawrence D Cohen, editor Paul Hirsch and Jack Fisk discuss the FX shots; Pino Donnagio's wonderful score; the first draft of the screenplay and the famous 'rain of stones scene that was left out of the finished product.
"Singing Carrie:The Musical" (6m 24s)
This is another 2001 featurette, where Cohen recalls how a night at the theatre inspired thoughts of a musical, and Betty Buckley (who played a different character in the stage version) tells how one particular performance went from boos to a standing ovation at the finale.
"Writing Carrie" (29m 7s) 2016
Here, Lawrence D Cohen talks about King's novel, explaining why it was decided not to include that literally heart-stopping scene. He also explains the challenges posed on this production, and there's a great midnight screening story.
"Shooting Carrie (15m 22s) 2016
This is an interview with cinematographer Mario Tosi, who talks about his mix-up approach to lighting this film and about the tools he had back in the day, comparing them to today's ultra high tech world.
"Cutting Carrie" (25m 9s)
A 2016 interview with editor Paul Hirsch, who explains why he was less than enthusiastic about the split-screen device and waxes lyrical on the freedom De Palma gave him.
"Casting Carrie" (16m 3s)
A 2016 interview with casting director Harriet B Helberg, who reveals how Spacek got into character for her screentest; her thoughts on the film and why they were initially unsure about one of the characters.
"Bucket of Blood" (23m 53s)
A 2016 interview with composer Pino Donnagio, who talks about how "Carrie" changed his life and reflects on De Palma, Bernard Herrmann and the challenges posed by the film.
"Horror's Hallowed Grounds" (11m 25s)
A look at the film's original locations, including the pig farm and the high school playing field.
"Comparing Carrie (20m 43s)
A visual essay from Jonathan Bygraves comparing the 3 screen versions of "Carrie": the 1976 original, the 2002 TV film and the 2013 adaptation.
Margaret White's character; the use of telekinetic powers and timelines are just some of the subjects discussed.

The extras are rounded off with an alternate TV opening; photo gallery; trailer; TV spots; radio spots and a "Carrie" trailer reel.
There's also a booklet (which I haven't seen), comprising of new writing on the film by Neil Mitchell, author of Devil s Advocates: Carrie, a reprint of the Final Girls 40th anniversary Carrie zine, and an archive interview with Brian De Palma.
It's so good to see a classic film receive such reverential treatment.