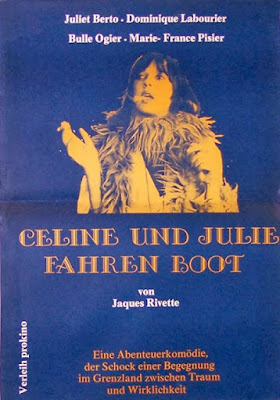 "Celine and Julie Go Boating" turned out to be Jacques Rivette's biggest commercial hit, throwing together two women who will ultimately seek to intercede
in a parallel universe that plays out in a Jamesian inspired haunted house. 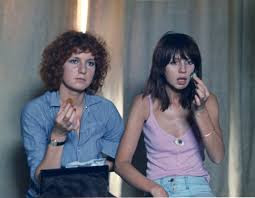 Celine (Juliet Berto), a magician, and Julie (Dominique Labourier) who is a librarian, cross paths in Paris and become inseparable, trading lives and personalities in their quest to stop a truly hideous crime.
Magic sweets enable the pair to watch events at the house unfold in a film-within-a-film as Bulle Ogier and Marie-France Pisier become the 'Phantom Ladies Over Paris',
with Barbet Schroeder in tow as the father of a young girl in mortal danger. 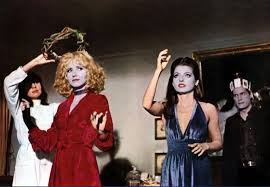 As recurring scenes play out, Celine and Julie react with amusement, boredom and horror, finally deciding to join this dislocation in time and save the girl. But from whom? 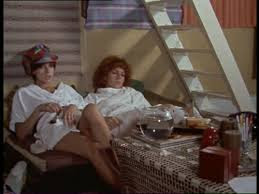 In parts, "Celine and Julie Go Boating" is very funny, with the two leads injecting physical comdey into proceedings, while at other times it anticipates Lynch's
"Mulholland Drive" with regard to the doubling experienced by Celine and Julie, and the population of the house who reach into 'the present' with bloody handprints
triggered by scenes from alternate reality. 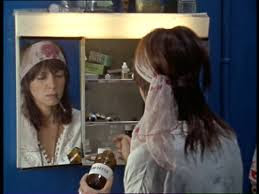 Here, Berto and Labourier were given a degree of improvisational freedom, though for the most part, "Celine and Julie Go Boating" followed a script that grew with input from the cast.
The end result is a 193 minute feature that fair zips by, begging repeat viewings to fully appreciate all that lies within. 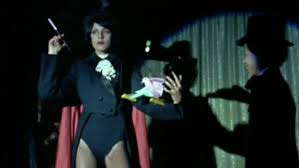 The wafer-thin line between fantasy and reality; the powers of memory and perception and the idea that each and every event is destined to be played out on a loop
for all time are just a few of the pieces in this puzzle, leading to a most haunting finale.
Rivette's clever use of mirrors which join this world and the next, and use of Montmartre locations to create a magical zone that bends all the rules and reshapes them, as leading ladies trade their lives make this a compulsory purchase for all lovers of Cinema Fantastique. 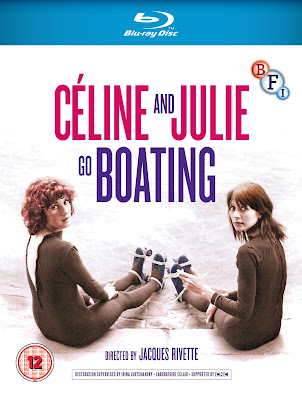 The BFI Blu-ray was restored and scanned at 2K from the original 16mm frame elements. Image quality is very impressive, unveiling a strong, stable picture that will delight
fans of this film.
The extras begin with a commentary track from Adrian Martin. Adrian provides background to the film; highlights the director's love of theatre and his willingness to take risks; gives valuable information on cast and crew (and quotes from a number of sources, such as Rivette and Berto); talks about various influences on this production; identifies cameos
and puts forward his theories and ideas regarding the onscreen events. It's a wholly rewarding track, and I'd strongly urge you to listen to every minute to increase understanding and appreciation of how much was accomplished here.

Next up, is "Jonathan Romney On Rivette and Celine and Julie Go Boating (19m 17s)
This excellent 2006 video essay takes a look at Rivette's career, and packs in theories and observations about the film, taking in Henry James, silent cinema and the idea that this is a girls own adventure. A valuable addition to the package.
"Tout la Memoire du Monde" (1956, 21m 54s)
Alain Resnais takes us inside the Bibliotheque Nationale in Paris, offering a fascinating look at how books are catalogued and also sharing some of its rare treasures.
We also see the constant battle against the slow decay of papers, books and manuscripts.
"The Haunted Curiosity Shop" (1901, 1m 55s)
WR Booth's 1901 short shows a shop owner plagued by various ghostly forms and includes some rather impressive effects shots.

The BFI also includes a booklet, featuring interviews with Rivette, Berto and Labourier; a review by Tom Milne; Susan Seidelman's reflections on her Rivette-inspired
"Desperately Seeking Susan", and an essay by scholar Jonathan Rosenbaum who is an authority on Rivette.
"Celine and Julie Go Boating" is available to buy now and a strong contender for those best disc of the year lists.