Blu-ray Review: The Bird With The Crystal Plumage (Arrow Video 2017) 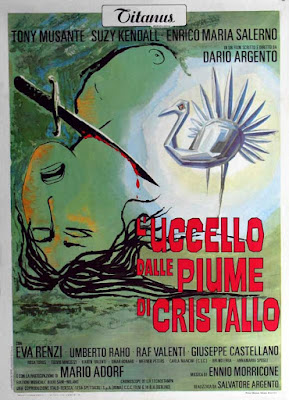 Shot in 1969 and released the following year, Dario Argento's debut feature inspired filmmakers to don black gloves, sharpen their knives and enter the bloody arena of giallo cinema.
The late, great Mario Bava had already kicked things off almost a decade earlier with "The Girl Who Knew Too Much", but it was "The Bird With The Crystal Plumage" that really kickstarted this movement.

Here, Tony Musante plays Sam Dalmas, an American writer who arrived in Rome 2 years earlier, in search of tranquility and inspiration.
After exhausting the sights of this wonderful city, Dalmas signs off a book on the preservation of rare birds - anticipating an important discovery later in the film - written purely for commercial gain, rather than a burning interest in the subject matter.
Dalmas is walking back to his apartment one night when he witnesses a beautiful woman who appears to be stabbed by a black clad figure inside an art allery.
Dalmas finds himself trapped between two glass doors, and when the police arrive, the assailant has taken flight, leaving the victim with a serious but not life-threatening wound.
Sam is interviewed by the police, who link this assault to a trio of slayings that have terrified the city's inhabitants and has his passport confiscated in the hope he will be of further assistance. After going through events several times, Sam is troubled by an incomplete vision of exactly what happened. Something doesn't quite make sense, and the question of what we see and what we think we see would become a recurring theme in Argento's cinema. 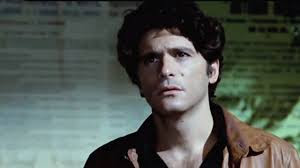 Although "The Bird With The Crystal Plumage" was not well received at the start of its life, the film went on to garner acclaim from audiences and critics and is, I believe, top-tier Argento.
With a score from Ennio Morricone that sets the scene beautifully, weaving the upbeat with the eerie, and inspired camerawork by Vittorio Storaro, "The Bird With The Crystal Plumage" offers a delicious twist-and-turn plot, several exciting set pieces and a cast reacting well to a screenplay that's both gripping and punctuated with humour.
Musante excels, leaving his mark as one of Argento's best leads, his performance unaffected by the various tensions that were present between actor and director.
Enrico Maria Salermo makes for an engaging police inspector; Eva Renzi and Suzy Kendall handle their duties with aplomb, and watch out for two contrasting quickies: a gripping sequence involving Reggie Nalder, and a memorable meeting with Gildo Di Marco's pimp who makes us laugh with his 'So Long' character.
It's a wholly entertaining ride, shocking in places and thought provoking always.
Those of you unfamiliar with Argento's work will find this an excellent starting point, while 'old timers' will once again relish this landmark film. 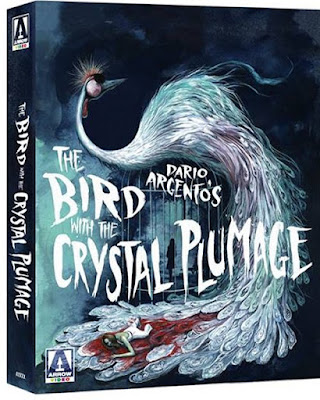 My first encounter with this film came via a Betamax videotape, released, I think, on the Stablecane label, and cost me the princely sum of £40.
Arrow Video's release unleashes a 4K restoration from the camera negative in its original 2.35:1 aspect ratio, that boasts exquisite detail.
The supplementary material begins with "Black Gloves and Screaming Mimis" (31m 54s).
This is an excellent video essay from film critic Kat Ellinger, who manages to pack in a wealth of material. Kat explores Frederic Brown's novel "The Screaming Mimi", offering a detailed breakdown of book vs film, and covers the 1958 film "The Screaming Mimi" starring Anita Ekberg.
Impotency and gender are also covered in an enlightening essay that's beautifully delivered.

"The Power of Perception" (20m 57s)
This features the thoughts of Alexandra Heller-Nicholas, who reflects on the role of art and the theme of perception in Argento's films.
"Four Flies On Grey Velvet", "Tenebrae" and "Phenomena" - a key example of heightened perception - are just a few of the films covered, together with "The Stendhal Syndrome" which Alexandra labels his last great film. Once again, it's a stimulating essay, underlining the many comlex themes at paly in Argento's work.

"Crystal Nightmare" (31m 24s)
This is a new interview with Dario Argento, shot in 2017.
Dario talks about how Plumage was written after a trip to Tunisia, and explains why he was almost fired during the shoot.
We get plenty of background info regarding the making of this film, including the lowdown on the director's experiences with Tony Musante, together with memories of working with Morricone, Storaro and Reggie Nalder. We also learn about which city held the key to Argento's future career. Fans will enjoy this recent interview with the great man.

"An Argento icon" (22m 5s)
Here, actor Gildo Di Marco recalls his role of 'So Long' (Garullo, the pimp), explaining how he got into acting and of Argento's way of working with actors.
We are also privy to his memories of Musante and Storaro and his amazement that people ask him for interviews.
It's a joy to witness this humble man discuss his own involvement in a film that still delights almost 5 decades on.

"Eva's Talking" (11m 19s)
This is an interview with Eva Renzi, recorded in 2005. Eva talks about her career (including "Funeral In Berlin"); Klaus Kinski and Tony Musante also crop up in conversation and she's not shy on holding forth about what she really feels about Plumage and the effect she thinks it had on her career.

Last, but by no means least, we have an audio commentary track from author Troy Howorth.
Troy delves into Argento's background; enthuses over Musante's performance; talks about "The Screaming Mimi " book; Krimi films; how "The Bird With The Crystal Plumage evolved and still finds time to cover Reggie Nalder's involvement (who apparently passed on a role in one of Argento's most famous films) and Argento's fallout with Morricone.
It's an excellent commentary, beautifully delivered with a fair amount of humorous asides that reflect the playful moments in the film.
Arrow also includes a trio of trailers: Italian (3m 11s), International (2m 48s) and Texas Frightmare 2017 (55s).

The final extra comes in the form of a 60-page booklet (which I haven't seen), illustrated by Matthew Griffin, featuring an appreciation of the film by Michael Mackenzie, and new writing by Howard Hughes and Jack Seabrook.
This is a compulsory purchase for Argento buffs, and highly recommended for newbies curious to see what all the fuss is about.
"The Bird With The Crystal Plumage" will be released on 26th June