With a wintry Berlin as its backdrop, Alex Bakshaev's "S&M:Les Sadiques" offers a heartfelt tribute to the late Jess Franco while making its own mark in the cinema of unease.
Here, in the heartland of David Bowie's greatest triumphs (look out for the shrine), trans peed along tracks headed to nowhere; the lost and the lonely nurse drinks in seedy
bars, and a young woman searches for bed and board in a city where everything has its price.

College dropout Marie (Nadine Pape) soon discovers that if the streets are mean, bricks and mortar can hose even more hazards as she narrowly avoids rape,
ending up in the abode of a woman who "takes orders from no-one.
Sandra (Sandra Bourdonecc) soon introduces her latest charge to a world where pain and pleasure co-exist; a lifestyle that leads to betrayal and murder.

With nods to "Succubus", "Venus In Furs" and "She Killed In Ecstasy", "S&M" also draws on the poetic elements of Jean Rollin, where snow covered streets replace beaches,
leaving short-lived footprints that will soon fade forever.
The film is accompanied by an evocative soundtrack from Kevin Kopacka and Alexander Zhemchuzhnikov ( Stuart Lindsay performing the music of Daniel White at various points), and brought to life by exquisite photography, capturing the magic and the harsh realities of the location.

Cast-wise, there are two stimulating performances from the female leads, ably supported by Kevin Kopacka (Marie's lover), Harry Baer as her Uncle Franz and Nikolaus Sternfeld as Tom.
Thanks to the script by Alex Bakshaev and Sarnt Utamachote, there's plenty to stretch performers and viewers alike, installing this as a film that will most certainly repay multiple viewings.

It's extremely bloody in places, with jealousy and betrayal leading to a reprehensible act that will surely make your blood run cold.
There are also moments of tenderness and togetherness, recalling happier times when the world seemed less oppressive.
"S&M: Les Sadiques" scores highly in all the key areas and carries my recommendation as a perversion story with a heart and soul. 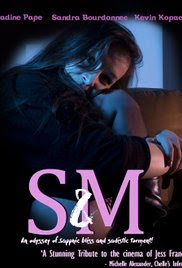 Image quality on the DVD is pin-sharp, highlighting the beautifully lit interior and exterior scenes. There are also 3 trailers. One for the main feature,
and for two other enticing titles: "Dylan" and "The Devil Of Kreuzberg".