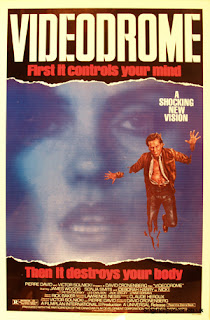 "Better on TV than on the street"

Viewing "Videodrome" at the cinema in 1983 was an overwhelming experience, and David Cronenberg's visionary film has lost none of its power some three decades later.
James Woods plays Max Renn; a cable TV hustler with an eye for tougher programming. His bosses feel anything with "too much class is bad for sex", and a presentation of a series titled "Samurai Dreams" is deemed to be too soft as far as unshakeable Max is concerned. Enter Harlan (Peter Dvorsky) - 'pirate of the high frequencies' who has worked with Max for "ten wonderful years". Harlan plays Max a 53 second feed of a TV series called "Videodrome" which consists of women being tortured in front of an electrified clay wall. Harlan declares the footage probably originates from Malaysia, and promises Max he'll secure additional footage very soon. 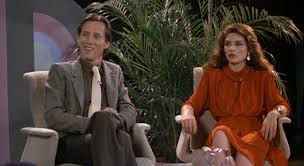 Max meets Nicki Brand (Deborah Harry) on a TV talk show and begins a relationship that is charged with Nicki's sadomasochistic tendencies. They watch a Videodrome tape recorded by Harlan, and Nicki is turned on by very extreme clips which is now identified as coming from Pittsburgh. To Max's horror, Nicki decides to audition for a show where no-one gets to come back next week, leaving her lover to track down the origins of what is essentially snuff TV.
Media prophet Brian O'Blivion (Jack Creley), his daughter Bianca (Sonya Smit) and the shadowy Cathode Ray mission plunge Max into a terrifying world driven by extreme hallucinations which lead to Barry Convex (Les Carlson) whose 'Spectacular Optical' company harbours a dangerous philosophy. 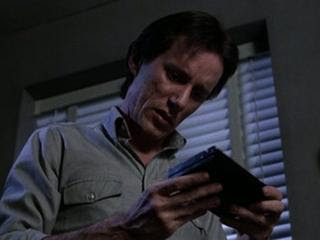 David Cronenberg's exploration of the mind/body split has realised some challenging and disquieting films, with "Videodrome" a prime example of a director at the top of his game.Of course, the director's rich vein of form was splendidly supported by a regular group of technicians: Ronald Sanders, Carol Spier, Mark Irwin and Howard Shore amongst the people who contributed so much to the look and sound of his films. Cronenberg's direction of actors greatly added to the texture of his work, and Woods and Harry in particular are excellent;the former being onscreen for practically the entire film, as his character experiences mind-bending hallucinations, courtesy of a programme that creates a new part of the brain. Perhaps one of the scariest implications of Videodrome is the hallucinations are perhaps triggered by their victims own depraved fantasies. This really is visionary filmmaking, with several aspects now reality (and some that soon will be), although "Videodrome" was not well received by many of its audience back in 1983. 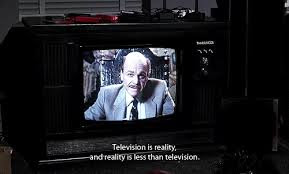 It was simply too far ahead of its time for many people, but has taken the status of cult movie on the home video circuit.
Like many Cronenberg films, it's not for the squeamish, but paid-up members of the cinema of unease have been amply rewarded by a film that defies the law of diminishing returns. Mark Irwin's inventive photography and lighting; Rick Baker's superb special effects and Howard Shore's doom-laden score combine to form a visual and aural landscape for Cronenberg's small-screen nightmares to work their wholly unsettling magic. 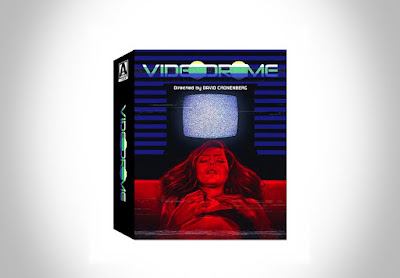 Arrow Video's limited edition Blu-ray numbering 3,000 units sold out within days of release, though there will likely be a re-issue in the near future including the extensive supplementary features but excluding the "Stereo" and "Crimes Of The Future" films and a 100 page hardback book which contains writing from Brad Stevens (on the alternate versions of this film) and Justin Humphreys who looks at the film in a modern context.
Image quality here is a revelation, especially for those of us who have been privy to Universal's cut UK Blu-ray release. The difference is considerable with an increase in sharpness, detail and colour composition.
My first port of call with regard to bonus material was Tim Lucas' audio commentary. Tim was the only journalist onset for the shoot (working for Cinefantastique magazine) and this track (re-recorded when additional material came to light) contains valuable information, observations and anecdotes covering the production. As usual, Tim provides background information on the cast, and is in a position to tell us what was shot on a particular date as well as scenes that were in the script but were never shot. He draws parallels between today's social media and O'Blivion's prediction that everyone will have their own number; talks about the locations used; discusses the actors on and off-screen and tells of a telephone interview with Harry who he'd first seen fronting Blondie on an Iggy Pop tour. Tim also suggests "Tales Of Ordinary Madness" would make for an interesting double-bill with "Videodrome". Another excellent commentary track that begs to be listened to more than once. 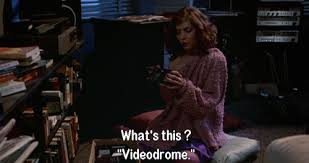 'Cinema Of The Extreme' (21m 4s)
Broadcast by the BBC in 1997, this Nick Freand documentary features Cronenberg, George A Romero and Alex Cox. Cronenberg talks about censors; the character of Brian O'Blivion and imagery in his films. Cox chats about Cronenberg's films and recalls the first time he saw "Shivers", while Romero confesses to being worried by some of the images he puts out and talks about his biggest problem with Horror cinema.

'Fear On Film' (25m 40s)
Shot in 1982, this round table discussion is hosted by Mick Garris, and features Cronenberg, John Landis and John Carpenter. The trio discuss the use of special effects; the classification system; why Horror is so popular and audience reaction at test screenings.

'Samurai Dreams' (4m47s)
The complete and uncensored cut, with commentary from Michael Lennick.
We learn about the source which inspired this footage and get to see two gatecrashes to this extended private party.

Helmet Camera Test (4m45s)
A look at Max's headset which served the purpose of recording his hallucinations. 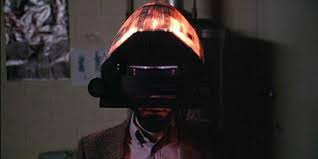 Here, Cronenberg experiments with different levels of murkiness, and there's reaction shots which include the divine Ms Harry clowning around.

Why Betamax (1m 11s)
The defeated champion of the video age, and exactly the right size for certain scenes in the film

Promotional Featurette (7m 5s)
Interviews with Rick Baker, Deborah Harry and James Woods who explains how Cronenberg sold the film to him. 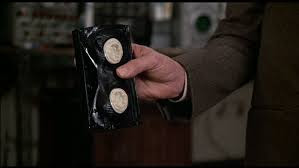 Interviews
Mark Irwin (26m 27s). Recorded earlier this year, Irwin talks about how he began work as a projectionist; the first couple of features he worked on; the art of lighting a set and Cronenberg's feelings towards storyboards.
Pierre David (producer) 10m 20s
David talks about Deborah Harry; the challenges posed by how to sell the movie; a disasterous test screening and how "Videodrome" was way ahead of its time.
Dennis Etchison (16m 45s)
Here, the author discusses his novelisation and his observations on the script. He explains why he finds Horror a more forgiving and welcoming branch of literature and talks about metting Cronenberg for the first time.

"Camera" (6m 42s)
Made in 2000 to help celebrate the 25th anniversary of the Toronto International Film Festival. This marked Les Carlson's 4th collaboration with Cronenberg, and another instantly memorable one. 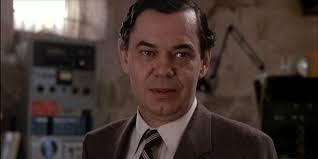 Here, he appears on a camera operated by children who capture him reflecting that his best days are behind him. A dream in which he caught a virus from a movie and thoughts on ageing and death and the acting process make this an ingenious and immensely moving short.

'Pirate Signals: The Last Broadcast' (25m47s)
This comprises of 16 deleted scenes from the TV broadcast, which have been digitised from the best available copy. 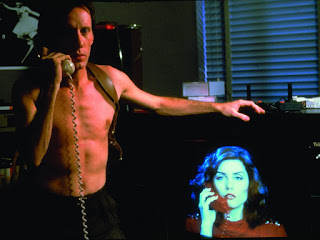 These segments make for fascinating viewing, and include Max being offered a choice of meals at the Cathode Ray mission and asking to watch Channel 83; a video love letter from Nicki and a limo pick-up; Max catching a very different relection of himself in a store window and a memorable TV epilogue.
Two trailers for the film (4m35s) round off a immensely satisfying package that stands out in a year of rich UK home video releases.