Blu-ray Review: Around The World With Orson Welles (BFI) 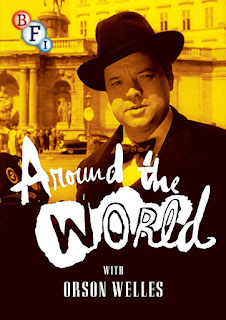 In 1955, Orson Welles was approached to write and direct a series of programmes to be filmed in various European countries. Welles was invited to present the series which would number six episodes and mark his first television production.
The opening episode - Pays Basque 1 -(26m 7s) is set in the Basque region, close to the Spanish border, populated by locals who are "not quite civilised" according to Welles. The Basques have lived in their territory longer than anyone else in Europe, but haven't done an awful lot, declares Welles. He talks to a villager who spent 23 years in America, and thwen returned to marry a local woman. While he loved many aspects of American life, the pull of home turf was way too strong to resist. Welles talks about the richness of living in more than one country, and interviews an American author who settled in the Basque region and loves the independence and the fact that everyone knows everyone else. This region contains much to impress our presenter who acknowledges the softening of life by machinery is a danger in many places in the world, but certainly doesn't apply here. 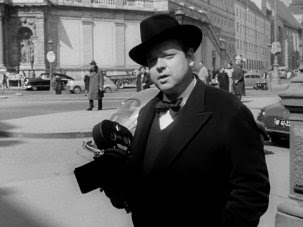 The second episode - Pays Basque II La Pelete Basque (26m 38s) - captures the Basque people at play, focusing on the energetic game of Pelete which has spawned great tennis champions: think Squash played with hands rather than rackets.
It's a tough sport to be sure, with badly bruised hands the norm and quite enjoyable to watch.
We also learn more about the community, where men and women sit separately in church and accept and integrate foreigners into their flock. As fireworks light up the night sky, we are left to reflect on a way of life which is uncomplicated and rather appealing in many ways.

Revisiting Vienna (27m 32s)was long thought to be lost, and begins with that wonderful music from "The Third Man". Here, Welles goes back to several locations from the aforementioned classic such as the Cafe Mozart, and finds the whole pace of life has changed. Expresso shops had elbowed coffee houses, but the wonderful pastry shops and their eternal customers and staff have thankfully remained. The elegance and overwhelming air of romance in this great city are amplified by Welles' interviews and roving camera. This is worth the admission price alone.

Saint-Germain-Des-Pres (26m 35s) takes a look at a colourful character in one of the oldest parts of Paris.
Raymond Duncan is an American and one of the oldest inhabitants here. His philosophy is simple: "Make everything you need for yourself and not need what you cannot make". Raymond believes paying money for something is a polite way of stealing, and attempts to carve out a living by sculptures, printing books and making clothes. "Never do what everybody does" was his Grandmother's advice and it certainly seems to have stood him in good stead.
Letterism, Jean Cocteau, Eddie Constantine and Juliette Greco all crop up during this stimulating episode.

London - The Queen's Pensioners (27m 40s) shifts the camera to our capital city, beginning with an interview that turns the spotlight on a group of widows who live in Alms Houses that were built in 1666.
These sprightly ladies are very comfortable in each others company, but don't feel the need to share a meal table: personal space is very important to them. Welles talks movingly about the dark side of old age, but it's pleasing to see that none of the ladies adopt a glass half empty approach to their final years. One is a relative of the Warner Brothers and , like the others, lights up the camera with her thoughts and outlook.
The final 11 minutes of this episode are given over to the Chelsea Pensioners: heroes who discuss their uniforms; the fact that their pensions are given over for their keep, and the horrors of war. They all live together and yet manage to enjoy privacy at the same time We could all learn a lot from everyone involved in this episode.

Spain - The Bullfight (27m 40s) is presented by Mr & Mrs Kenneth Tyson, with a cigar-smoking Welles enthusing about the excitement generated by this 'sport'. We see the training of matadors; the manufacture of costumes; the infirmary for matadors who get too close to the bull and, of course, the main event which Welles declares is the only thing in Spain that's punctual. It's a spectacle to some and a barbaric pursuit to others: those in the latter camp will doubtless gain pleasure at the sight of a matador falling foul of the business end of an enraged bull.

The extras begin with "The Dominici Affair By Orson Welles" (53m 59s).
In 1954, an English couple and their 10-year old daughter were murdered while camping on the outskirts of the French village of Lors in August 1955. This is a documentary and partial reconstruction of Welles' unfinished episode, "The Tragedy Of Lors".
Local farmer Gaston Dominici was convicted of the murders in 1957 and sentenced to death, but was this a miscarriage of justice? Christophe Cognet's documentary is a completed version of this episode, containing interviews with key local figures, and technicians who worked with Welles on this project.
The original script was used to assist this documentary (Welles commentary being lost), which is an absorbing investigation into a dreadful crime.
An alternative theory as to the murderer's identity is suggested, and an event that caused Gaston cinsiderable stress is also taken into account.
It's a remarkable document, shot just after Dominici's trial, and a case that will now invite further speculation some six decades on.

The Levin Interview With Orson Welles (27m 52s)
Bernard Levin's 1967 interview with Welles begins with the great man declaring his radio work gave him the most satisfaction, and goes on to admit he didn't care too much for screen acting.
He talks about the problems faced by the British film industry - which frustratingly remain today - and how much he regretted not going into politics. "Citizen Kane" and "The Magnificent Ambersons" also crop up, along with his belief that actors should be "out of their time".
This interview is a nice way to end a series of travelogues and documentaries that capture moments in time in some interesting places and allow us to get to know Welles that little bit better.

Image quality varies on this Blu-ray, with some episodes being sharper than others. Overall, it's fairly easy on the eye, with decent contrast.
The BFI have included a booklet with this dual format release, containing an essay by Ben Walters.
Highly recommended for Welles buffs.

Email ThisBlogThis!Share to TwitterShare to FacebookShare to Pinterest
Labels: Around The World With Orson Welles, BFI, Orson Welles