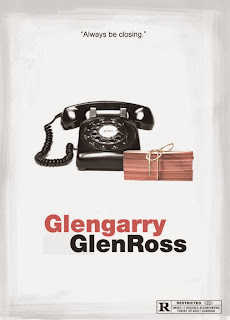 "And to answer your question, pal, why am I here? I came here because Mitch and Murray asked me to. They asked me for a favour. I said the real favour, follow my advice and fire your fucking ass because a loser is a loser" 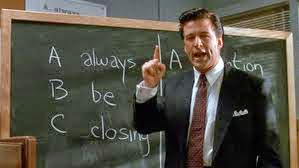 And there we have the tail-end of a savage wake-up call from a character named Blake, sent in by the heads of real estate firm Mitch and Murray to give their sales force the bollocking of a lifetime. In fact, this is a bollocking royale and, as Blake, Alec Baldwin has probably never been better. Here, Blake marches out from the office of "company man" Williamson (Kevin Spacey) and delivers a shattering assault on the senses of three v-e-r-y tired men. We have Sheldon Levene (Jack Lemmon); a veteran salesman whose better days are behind him and the double act of Dave & George (Ed Harris, Alan Arkin); a pair of inveterate whiners who are destined to perform the bar sketch, mimed by Blake, in the not-too distant future. Missing in action is one Richard Roma (Al Pacino), who is attempting to persuade James Lingk (Jonathan Pryce) to buy some land, with his other 'office' (a nearby bar), ensuring Lingk literally enters into the spirit of things. 6 0r 7 doubles later and Roma has his man, seducing him into signing on the line that is dotted with a bewitching combination of hooch, personal anecdotes and philosophies. This really is prime time Pacino: one moment calm, laidback and persuasive, the next raging at colleagues and even the police who are called in to investigate the theft of some gold-plated leads. Pacino becomes the epitome of a smooth-talking salesman who really does have a gift, coupled with an outrageous line in bullshit. Indeed, it's clear that in another 4 or 5 years, his character will mutate into Blake with fancy cars and extreme pep talks on the horizon. On the surface, Roma seems a caring guy, praising Sheldon when he finally closes the Nyborg sit, but take a closer look at his face and you'll see he's really not interested in Levene's 'war stories'. In short, he's ultimately an unlikeable individual and the same can be said of the rest of this cast. The fact that Glengarry is totally absorbing and entertaining from start to finish with no sympathetic characters, is a tribute to director and cast who help fashion a production that gets better with each viewing. Hard-nosed Williamson; living-in-the-past Levene with a sick daughter in hospital, and who still makes me squirm with his old school mentality; Dave and George borrowing Al's megaphone to amplify their incompetence and anger at themselves. Hell, even Lingk fails to command any respect, allowing himself to be sucked in and painfully building up to a half-hearted stand-off during a hilariously bogus partnership between Sheldon and Ricky. 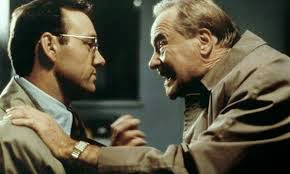 This really is a masterclass in acting and the script - penned by David Mamet - must have been a real joy to deliver. There are other 'characters' in this film that we never get to see: the Nyborg's whose signatures briefly put Shel back in the big time ("Put me on the Cadillac board!"), and Jerry Gross: the latter being mentioned by every member of the sales force, coming over like some bogeyman who would be only to willing to employ this motley crew of cheats, spivs and, yes, losers should they care to simply walk across the street. Foley's film really does take the lid off the precarious world of sales where, for every high flyer, there's a dozen poor souls who don't cut it. Lies, petty actions, intense rivalry and the worst kind of jealousy rule this world of pain but, for the odd few like Roma, the rewards are massive. 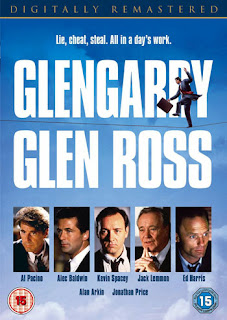 Independent distributor Odyssey DVD have just re-launched in the UK and returned with a release roster of cult and classic movies. The first 6 films are: 'Grey Owl''Drums Across The Mohawk', 'Electra Glide In Blue', 'Dirty Mary Crazy Larry', 'Julia' and 'Glengarry Glen Ross'. The DVD's are out now, and Glengarry offers a handsome transfer.
Posted by Steve Langton at 06:52