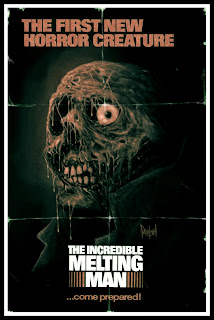 First seen in the UK on a dobule-bill with 'The Savage Bees', William Sachs' 'The Incredible Melting Man' has been labelled a bad movie by many critics and consumers. Happily, this film also has its fair share of supporters, of which I am one. Every film has a story behind it regarding production or location issues, finance or cast and crew difficulties. 'The Incredible Melting Man' encountered hard-headed producers who disagreed with Sachs' vision of a comic book tongue-in-cheek affair, and instead wanted a atraight-edged, serious horror movie. 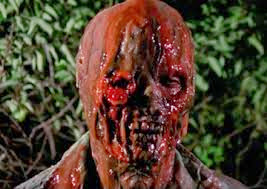 The film begins with a voyage to Saturn going terribly wrong, resulting in the deaths of two crew members and the transformation of a third into a gelatinous incarnation of his former self. Now, astronaut Steve West (Alex Rebar) roams Planet Earth looking like a cross between Hellraiser's Frank and one of Lucio Fulci's zombie outcasts, oozing fluid from his body and leaving a trail of corpses in his wake. The melting Man needs human cells to live on, resulting in a line of victims including authoritarian figures hot on his tail, and civilians who offer no threat. Dr Ted Nelson (Burr De Benning), General Perry (Myron Healey) and Sheriff Blake (Michael Alldredge) represent the hunters who use gieger counters to track the radioactive trail of a good man who has turned into a life-threatening force. 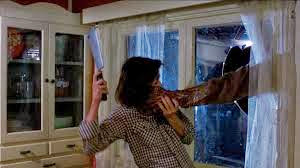 On the debit side, dialogue and performances leave a great deal to be desired, though some of this can be put down to the director's desire for a more comic approach which does sneak in on quite a few occasions. Despite the producers intentions, this is not a film to take seriously, but there are a couple of suspenseful scenes that will have you on the edge of your seat, plus a spectacular death on wires and the unveiling of Rainbeaux Smith's prize assets. If you're in an undemanding mood, 'The Incredible Melting Man' is an oddly compulsive watch, and a reminder that B-Movie double-bills often delivered quite a kick. 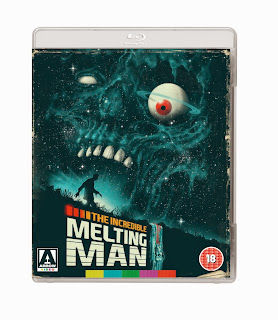 Arrow's Blu-ray disc contains a director's commentary track where William Sachs flies solo, providing cast and crew info, chronicling his disagreements with producers and highlighting footage that had nothing to do with him.It's an informative and enjoyable track, displaying real warmth for some of the participants - including effects wizard Rick Baker - and real regret that his original vision never achieved lift-off.
A 7 minute Super 8 Digest version of the film is also included on this disc. Super 8 was the first Home Video distribution format, and it's nice to experience a little bit of history as this condensed version briskly unfolds. Interviews with the director and Rick Baker follow, running for just over 19 minutes. Sachs reveals George A. Romero's 'Night Of The Living Dead' was the main inspiration for his film, while Baker explains he asked for what he thought was an outrageous amount of money for his services in the hope he'd be turned down. While he doesn't rate the performances, Baker acknowledges the film certainly has a fan base, and it's good to hear both men airing their views.
A 3 minute interview follows with Greg Cannom who filled the role of special make up effects. Greg recalls 'The Incredible Melting Man' was his first gig, and tells how he first met Rick Baker.
A 4 minute promotional gallery - which includes some nifty design work - and a theatrical trailer round off the package.

Arrow's Blu-ray presentation scores highly on image quality, looking clean and sharp, with strong colours.
Another of Arrow's excellent booklets comes with the disc,featuring Mike White's excellent 'Going Crackers' essay which talks about the film's staying power, the novelisation and the role of food in the film.
'It Came From The Super 8!' A Potted History Of The First Home Video Distribution Format is written by Douglas Weir, is an invaluable short history of the format, looking at the beginning and the end of what was cutting edge technology back in the day. The booklet is illustrated with some terrific colour and b/w stills, and add the finishing touches to an excellent package.

'The Incredible Melting Man' certainly has its shortcomings, but in many ways, they add to its charm. The Blu-ray represents plenty of bang for your buck, and will certainly add to its cult following.
Posted by Steve Langton at 02:10