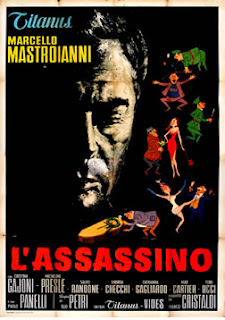 Italy has produced many top-tier film directors: Fellini, Antonioni, Mario Bava, Dario Argento.... the list goes on. You may like to add the name of Elio Petri to this very special club. I first encountered his work via a VHS tape of the rather splendid 'A Quiet Place In The Country', and made a mental note to acquire further titles from his filmography. Now, Arrow Academy's Blu-ray release of 'L'Assassino' (aka 'The Ladykiller Of Rome') will further raise his profile, hopefully paving the way for more Petri films to emerge on UK home video. 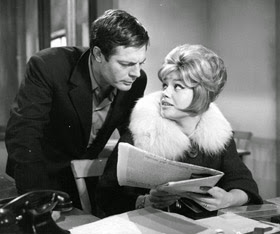 Fresh from Fellini's 'La Dolce Vita', Marcello Mastroianni fills the boots of Alfredo Martelli; an antique dealer who was described by Petri himself as being part of "a new generation of upstarts". This is a particularly apt description as Martelli is a character who is difficult to take a shine to, being an active participant in a decline of the moral values movement where the only person is me, the only number is 1 and the only time is now. He's engaged to one Nicoletta Nogoro (Cristina Gaioni)who is the daughter of a wealthy industrialist, and not exactly on poverty row. The only other woman currently in his life - save for his mother who is soon bundled back onto a bus after a short-lived visit to see her son-is Adalgisa De Matteis (Micheline Presle) who financed Martelli's new shop. A healthy bank account is clearly number one on Martelli's list of female attributes, but does this self-serving policy lead to murder? 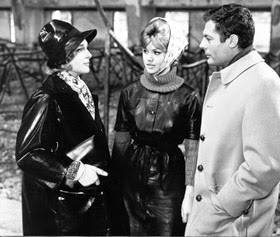 When De Matteis is found dead in her hotel room, it emerges that Martelli visited shortly before she died. Was Martelli really responsible for her murder, or should the police look elsewhere for her killer? Petri uses flashbacks to add background to key characters and their relationships, while an old school police commissioner - the wonderfully named Palumbo (Salvo Randone) attempts to crack Martelli while refusing to hide his disdain for the lifestyle of the accused. As the film progresses, some members of the audience may well feel a shred of sympathy for an increasingly beleaguered man who protests his innocence loud and long. Indeed, it's somewhat disconcerting to witness the police and even fellow prisoners gradually wear him down, making this an uncomfortably fascinating character study. 'L'Assassino' could be said to be one of the forerunners of the Italian 'giallo' genre, but without black-gloved killers and graphic murder scenes. It's more tone and atmosphere, with a greater degree of police involvement than is often the case, and flashback scenes that may well change your mind with regard to innocence or guilt. It's certainly a fine, confident piece of work, and all the more impressive when you consider it was Petri's feature debut, back in 1961. 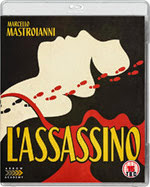 Arrow Academy's Blu-ray presentation is a fitting showcase for Carlo Di Palma's luminous monochrome photography, with good depth and fine detail. It was made from the original camera negative (missing the first and last rolls) and from a first generation interpositive, and these two elements were scanned at 2k for this restoration . The sound is uncompressed 2.0 from a 35mm negative and digitally remastered with Piero Piccioni's jazz-tinged score beautifully rendered. The film is preceded by a 9 minute introduction from Pasquale lannono, who talks about Petri and his active interest in politics; his formative steps in the business making documentaries and how 'Ossessione' and 'Rome Open City' kindled his involvement in cinema.
'Tonino Guerra: A Poet In The Movies' was shot in 2008 and runs for just over 51 minutes. Here, Tonino speaks about his childhood; his early career as a school teacher; how he got into the movies as a result of a poetry book, and his great passion for drawing. We also hear about the great directors who have benefited from his screenplays: Antonioni, Fellini, Vittoria De Sica and Francesco Rosi to name but a few. There's also a special mention for Tarkovsky's wonderful 'Nostalghia'. 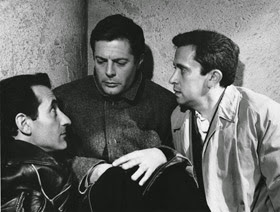 This most welcome release also comes complete with another of Arrow's splendid booklets, offering a beautifully written feature by Camilla Zamboni which considers the camerawork, Martelli's character, the state of Italian cinema when this film came out and pretty much everything you need to know in order to further understand and appreciate this film. There's also a selection of reviews, Petri's piece, 'Italian Cinema: A Castrated Elephant', which discusses Italian cinema and a fine selection of stills.

'L'Assassino' is available to buy now, in a dual-format release comprising a Blu-ray and a DVD and is region B/2.