Blu-ray Review: Phantom Of The Paradise 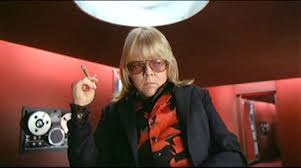 Brian De Palma's 'Phantom Of The Paradise' opened at US cinema's on Halloween 1974, and became a box office flop. Although it performed well in Winnipeg and France, while also becoming a hit in Japan, Phantom was initially deemed an over ambitious failure. Happily, the film has steadily built an enthusiastic cult following over the years, and will be available on Blu-ray in the UK from 24th February, courtesy of Arrow Video. 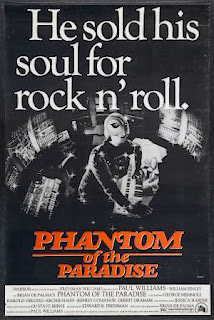 Phantom is a heady combination of The Phantom Of The Opera, The Picture Of Dorian Gray and the Faust legend, with struggling singer/composer Winslow Leach (the late William Finley) striving to better his current position as back-up to The Juicy Fruits a band produced by the egotistical Swan (Paul Williams) - who plans to make his new 'Paradise' venue the ultimate rock palace. Swan hears Leach's music and believes it will be the perfect choice to open his new venue, but the pair have very different ideas regarding who will perform Leach's songs. Winslow favours aspiring singer Phoenix (the wonderful Jessica Harper), while Swan is determined to install colourful Beef (Gerrit Graham) as his artist of choice. 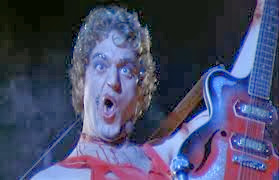 Swan (who De Palma modelled on Phil Spector) needs Leach out of the picture and has him framed. After serving around 90 seconds of his term, Leach escapes and returns to The Paradise where he plans his own brand of industrial sabotage. With Swan believing his rival to be dead ('Mad Tunesmith Bites Bullet'), the scene is set for a phantom to stalk the corridors and auditorium, leading to a twisted deal and a contract signed in blood, which ultimately brings about a sea change in the relationship between Leach and his diva.
With its perfect marriage of sound and vision, this cartoon with real people gains in stature with each viewing, promoting infuriatingly catchy tunes and emerging as a 24 carat cult classic with the legs to consistently attract new viewers and keep enchanting those already under its spell. 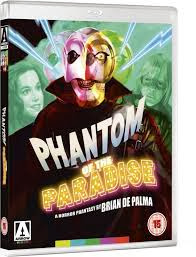 Arrow's Blu-ray presentation is crisp and polished, with fine contrast, good detail and strong colours. Detail is also very sharp, with the Phantom's costume, the set design and exterior scenes benefiting hugely from this hi-def incarnation.
On the extras front, Arrow have included some excellent supplementary features, beginning with 'Paradise Regained'; a 50 minute documentary with contributions from key participants including De Palma, Paul Williams, William Finley, producer Ed Pressman, Gerrit Graham, Jessica Harper and DOP Larry Pizer. Here, De Palma discusses the uneasy mix of economics and art, moving onto the Psycho-esque shower scene intended as two fingers to the flak received for 'Sisters'. All participants possess good recall of their time onset; a testament to the level of enjoyment experienced on this production, and are justifiably proud of their involvement in a legend that continues to grow.
'Guillermo del Toro Interviews Paul Williams' runs for 72 minutes, being two talented friends chatting about careers in film and music. Williams - composer of songs for The Carpenters and Three Dog Night amongst others - talks about his formative years, of his love for the works of Cole Porter and Gershwin and his eventual appreciation of rock and roll. We also hear about Williams' career in music which realised some timeless classics, and there's plenty of input from del Toro who is always an absolute joy to listen to. del Toro reveals he is full of admiration for Phantom, and explains how it influenced certain scenes and motifs in 'Cronos'. 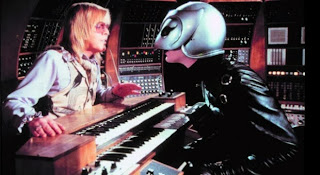 Next up is 'The Swansong Fiasco'; an 11 minute feature which details how Led Zeppelin's manager (Peter Grant) threatened to block Phantom's release over it's use of the 'Swansong' moniker. Split screen is used to show unused production footage, together with the finished product which detail how shots containing the Swansong logo had to be altered by reframing or shortened and replaced with the 'Dead Bird' logo of Death Records. This is just part of the Phantom legend, and it's good to see it covered here.

A 9 minute interview with costume designer Rosanna Norton takes a look at how much was achieved on a low budget, with Rosanna explaining how her creative powers were put to the test, and states 'Phantom' remains unique amongst the many films she's worked on: interesting to note Sissy Spacek worked as a set dresser on this film.

'William Finley On The Phantom Doll' is a short (35 second), sweet pitch on what must be a sought-after collectable for fans of this film.

'Paradise Lost And Found' gives us 13 minutes of scenes from the cutting room floor, involving a split-screen account of alternate takes compared to the finished film, including the shower scene, Phoenix's audition and the rooftop scene which works much better in the finished version, though the alternate take ihas real interest value.
Trailers and a b/w on-set stills gallery end this wholly satisfying package.

Arrow's Blu-ray package delivers a first-rate presentation of this classic which heightens our appreciation and enjoyment of a film whose pulse has never been stronger.
Posted by Steve Langton at 10:41