The Girl From Rio 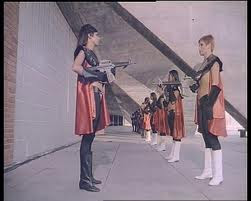 Jess Franco and Harry Alan Towers follow the samba beat with this tale of a disreputable businessman arriving in Brazil with $10 million worth of ill-gotten gains. Forget Ronnie Biggs and instead devote your attention to a guy named Jeff Sutton (Wyler), who hooks up with exotic spy Leslie ( Maria Rohm), before evading the clutches of four knife-wielding masked men in the employ of crime lord Masius (Geroge Sanders).

The ‘Big M’ is aware of Sutton’s recently acquired wealth, and seeks to relieve him of this ‘burden’ while on the other side of the fence lies Sunanda (Shirley Eaton); self-styled Queen of Femina – a city of women who are slowly working towards the total empowerment of men and view Sutton as the latest in a long line of reluctant financiers. Alternating between blonde and brunette and decked out in outrageous pop art threads or fetching Cleopatra garb, Eaton appears to be having a ball with her character while at the same time undoubtedly aware of the many absurd lines of dialogue she’s asked to recite. George Sanders also goes with the flow, delivering many of his lines with an air of detachment; a class act playing a character unable to view the acts of violence carried out at his request. Witness the scene where Lesley is ducked several times in a swimming pool, while Masius reads a Popeye comic rather than be privy to the victims ordeal.It’s here that Rohm’s beautiful face is at its most alluring – say what you will about this much-maligned director but Franco has a track record for employing a host of sensual women and his screen captures of Rohm, together with the likes of Miranda, Stroemberg and Janine Reynaud mix sleazy with surreal to often devastating effect.

While fans of Jess and Maria will rejoice at the chance to see another chapter in their story, those same people may well grumble at the amateurish action scenes (you can be sure Ridley Scott did not use Franco’s helicopter footage as a blueprint for Black Hawk Down) and laughable instalments of torture. Well, chill out folks! This is nothing more than throwaway pop art trash, to be approached with a sense of fun and due lack of caution.

For many people, Franco’s partnership with Towers (numbering 9 films) was largely a bridging gap between past glories and a new golden age which would begin with Vampyros Lesbos (1970). That’s possibly an unfair assessment, as Towers was involved with at least one Franco classic (Venus In Furs) and several worthwhile projects that continue to grow in stature ( Eugenie – The Story Of Her Journey Into Perversion, The Bloody Judge). The Girl From Rio scores above average in the mindless entertainment stakes but, given the Franco riches currently available on DVD, it’s unlikely to attract multiple viewings from all but the most committed Franco freak.

Blue Underground’s DVD presentation unveils The Girl From Rio via a nice widescreen transfer with rich colours, warm fleshtones and several instances of edge enhancement, which do not prove too distracting.
Extras include: a Franco biography; ‘The Facts Of Sumuru – a potted text history of the “Female Fu Manchu” with no recognizable national identity – and ‘Rolling In Rio’: a 14 minute featurette in which Franco, Towers and Eaton participate in video interviews. Here, Franco and Eaton both exhibit mutual admiration, though Eaton does accuse Franco of taking liberties with a ‘body double’ and Towers joins in the fun, revealing the Rio shoot also provided the means to film roughly 25% of Franco’s 99 Women feature 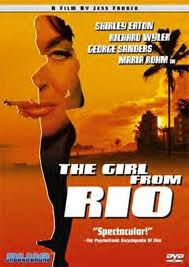