DVD Review: The Living Dead At The Manchester Morgue 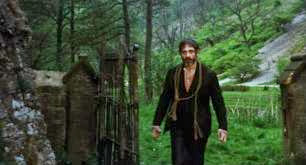 During a video introduction on Anchor Bay's DVD, Jorge Grau expresses the hope that viewers will be scared by this blood-splattered account of ecological mayhem.

Fast approaching its 40th anniversary, The Living Dead At The Manchester Morgue proves rather adept at increasing the number of beats per minute, with some fairly explicit gore and several set-pieces that are brimming with tension.

The fun really begins when the Department Of Agriculture unveils an ultra- sonic sound machine designed to drastically reduce the insect population. Luckily for us, Grau and his team of pen-pushers had other ideas, sparing us the horrors of 'Farming Today' and instead standing us lunch by using this less-than cutting-edge technology to resurrect the newly dead. Soon the titular crypt and surrounding area - actually based in the Lake District (and shot mostly in the Peak District) - are awash with zombies and it's up to George and Edna (Lovelock & Galbo) to save the day. These two central characters gain in stature as their predicament grows ever worse: Galbo being the sensitive, vulnerable half of this 'odd couple' pairing, but still offering steadfast support to the initially irritating Lovelock, whose inner strength comes to the fore as their situation intensifies.

Probably the most colourful character aside from undead down-but-not-out Guthrie - is the gloriously stupid Sergeant McCormick (Kennedy) who must have been a great inspiration to a certain self-styled ''God's Cop' during those heady days of 'Video Nasties.' Indeed, one can't help but wonder if Grau's less-than respectful portrayal of the police may well have contributed to some pretty heavy interest in suppressing video distribution of his film. Quite possibly, though a certain Gianetto de Rossi did his little bit by providing fx for some delightful 'dining' sequences that would resurface to even greater effect a few years later in Fulci's Zombie Flesheaters.

Die-hard fans of the aforementioned classic may scoff at even the tiniest comparison with Grau's movie but Manchester Morgue is well worthy of inclusion in your list of top 'Living Dead' flicks.

Watch out for: breast munching, the disembowelling of a brave, but foolhardy police constable, and the wonderfully stomach-churning scene where Lovelock and Galbo attempt to escape from a crypt full of living dead.

Email ThisBlogThis!Share to TwitterShare to FacebookShare to Pinterest
Labels: Jorge Grau, The Living Dead At The Machester Morgue