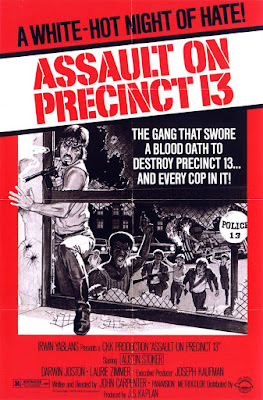 My first encounter with John Carpenter's "Assault On Precinct 13" occurred during a golden age of cinema double bills in the 1970s.
In those days, film buffs had the opportunity to catch the likes of Lucio Fulci's "The Beyond" / "House By The Cemetery", "The Exorcist" / "Exorcist II" and "Jason And The Argonauts" / "Chariots Of The Gods". Assault turned up on a double header with "Halloween" and quickly convinced me that Carpenter was a director who merited special attention from that point on.
Certainly, Assault still comes over today as a job well done, being an intoxicating old school mix of "Rio Bravo" and "Night Of The Living Dead" as heroes and heroines emerge from a retired police station under siege from a LA gang.

After a bloody shootout between police and gang members, we join Lieutenant Bishop (Austin Stoker) who is on the way to oversee the closure of the Anderson precinct police station. Here, the cells are empty and the electricity supply is due to be bumped before the 4.00am shutdown as Leigh (Laurie Zimmer) and Julie (Nancy Loomis) carry on winding down their duties. On the other side of town, shackled prisoner 'Napoleon' Wilson (Darwin Joston) is heading for Death Row under armed supervision while members of the LA Thunder - still smarting from the deaths of 6 members - commit an unbelievable atrocity which culminates in a shell-shocked man stumbling into Anderson station having killed the gang's leader.

Wilson also ends up at the station , but it's really the grieving stranger who is the subject of the gang's attention, prompting the delivery of a chilling blood oath declaring they are willing to lose more gang members until revenge is taken.
So begins a long, dark night of the soul with the hoodlums silencers greatly adding to the eerie atmosphere and ensuring no-one can hear their shots. 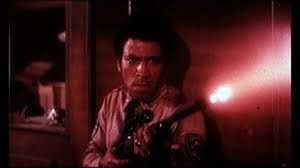 Carpenter's taut direction and entirely memorable score - one of his very best - creates a nightmarish scenario which the cast respond to admirably. We have Julie, desperate to turn over a man whose world (unknown to them) has already ended, while Bishop and Wilson gradually build mutual respect in the fight to stay alive. Best of all may be the gorgeous Laurie Zimmer, who comes over as an enormously resourceful woman in the face of true adversity. 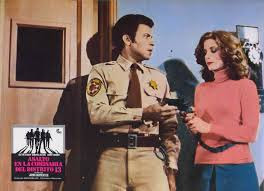 2016 marks the 40th anniversary of this film, which remains the crowd-pleasing gem it was all those years ago. The infamous scene that drew gasps of disbelief at the screening I attended has retained its power to shock to the core, and there are many other scenes that stay with you long after the credits have rolled: witness the scene where stray bullets disturb a wall clock from its previously serene resting place, demonstrating time no longer has any meaning in this night without end. 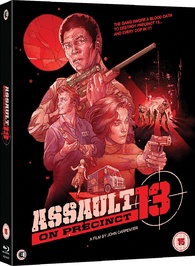 Second Sight's Blu-ray presentation adds fine detail, solid colours and even a greater sense of purpose to this classic, and goes on to deliver some meaty extras for those of us who love to really step inside a film.
First up is a John Carpenter commentary track where the director talks about the challenges he faced with a $100,000 budget. John discusses the critical reception; admits there are a few scenes he wouldn't have got away with today; chats about cast and crew and pronounces that Assault was unique for its time.

Art director and sound effects designer Tommy Lee Wallace is joined by Michael Felsher for a second commentary track which takes in Tommy's high school days with JC; the panavision filmmaking process; that shocking murder scene and his own work as a director.

Return To Precinct 13: An Interview With Austin Stoker (9m 20s) 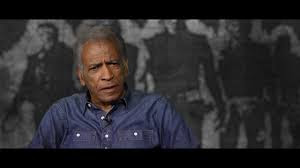 Austin recalls his early movie-going experiences; how he first met JC, and the big responsibility of being the main character.

Filmmaking With John: An Interview With Tommy Lee Wallace (21m 41s)
Tommy recalls his high school band days with JC; talks about the magic of 35mm film and of his relationship with John, calling him extremely well prepared and motivated.

Captain Voyeur (8m 27s)
Made in 1969 at Southern California's School of Cinematic Arts, "Captain Voyeur" is a John Carpenter student film, recently re-discovered by school archivist Dino Everett in 2011. This creepy little number could be loosely referenced to Carpenter's "Halloween", employing a masked figure on the loose in back gardens and alleyways where a light in a window is the signal for our peeping tom to strike. 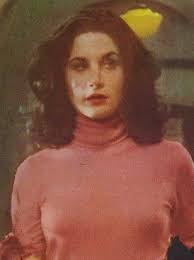 In 1977, Charlotte Szlovak wanted to make a film that would really translate the city of LA, with a woman at the centre of the story.
Charlotte chose Laurie Zimmer who played an actress driving round the city in search of a indefinable something to spark her life.
After filming was completed, Charlotte lost touch with her newfound friend, and this compelling short tells the story of her journey to find Laurie. It's a haunting tale for sure, as Charlotte delivers poetic narration while negotiating blond alleys and dead ends during her search for the actress. It's an uplifting story, demosntarting that a strong bond can never truly be broken.

Interview With John Carpenter and Austin Stoker (23m 8s)
This was filmed before an appreciative audience at the Egyptian Theatre in 2002, where JC and Austin discuss how Austin got the role of Bishop and other cast choices. "They Live" and "Dark Star" are just two of the films that come up during a lively Q&A with the audience.

The Sassy One With Actor Nancy Loomis (12m 44s)
Nancy recalls her formative years at high school and USC; tells how she handled nerves during her first couple of features; talks about "Halloween" and "The Fog" and touches on her opinion of fan conventions.
The extras conclude with a 2m 3s theatrical trailer and 1m 4s worth of radio spots. Fans will also be delighted by the inclusion of a bonus CD soundtrack disc exclusive to the box set and 5 exclusive art cards.
"Assault On Precinct 13" will be released on 28th November in the UK, and is an essential purchase for all fans of John Carpenter.