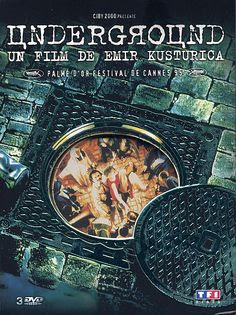 Emir Kusturica's magnificent beast of a film earned him the Palme d'or in 1985: the second time he's won this prestigious award.
"Underground" also attracted fierce criticism, with accusations of engaging in Serbian propaganda, and his use of documentary footage also upset many viewers.
The film centres on Blacky (Lazar Ristovsky) and Marko (Miki Manojlovic)best friends who are both engaged in selling arms to partisans.
Gorgeous actress Natalija (Mirjana Jokovic) soon drives a wedge between the pair, and the lovestruck buddies eventually find themselves further separated by a terrible deception. 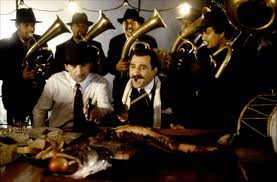 Marko, driven by jealousy and pure greed, keeps his friend below ground in a cellar for 20 years, feeding him the lie that the second world war is still going on above his head, with air raid sirens and other bogus methods ensuring he stays firmly out of the picture.
Above ground, Marko prospers, making hay with his life and career as time marches on towards a day of reckoning. 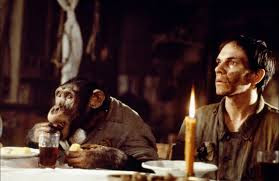 While some people may not care for the main players - who boast few redeeming features between them - they are undeniably fascinating to watch as the years overtake ambition and personal gain en route to sobering old age.
Wounded, weary faces are much in evidence during the many sombre moments, yet there are also scenes of priceless comedy that lighten the load, with running gags, a hilarious sequence where a bicycle headlamp assists a most unorthodox birth and several instances of pure slapstick: do look out for the riotous wedding scene where the shellshocked bride - betrothed to Black's son - sits wondering just what the hell she's married into as a revolving band plays on regardless, and the most talented chimp this side of Argento's "Phenomena" who brings the war a little bit closer to home.
This carrot and stick approach, for me, works beautifully, elevating the film and ensuring it's one of the quickest 170 minutes you'll encounter. 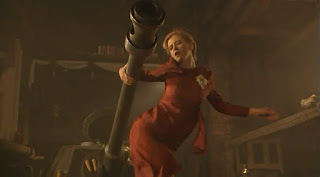 Serious study of relevant historic periods may well cast "Underground" in a different light, but the many arresting visuals and striking, layered performances do make for compelling viewing. 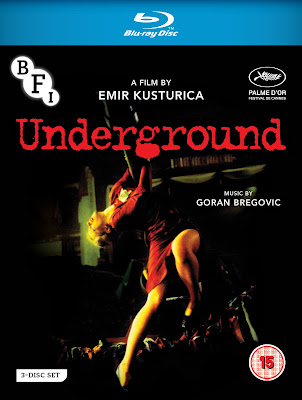 This BFI release consists of a Blu-ray containing the 170 minute version of "Underground", plus 2 x DVD discs which include Kusturica's six-part tv version, "Once Upon A Time There Was A Country" which runs for 5 hours 15 minutes.
Disc 2 contains 4 episodes, running for 3 hours 7 minutes, while the 3rd disc delivers episodes 5 & 6, running for 1 hour 41 minutes.
This extended version is able to spend more time on characterisation and also tightens the narrative considerably, bringing a greater degree of coherence, while the scenes below ground have a greater kick now, adding to the enormity of a deception that ran for two decades. 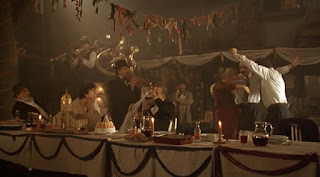 "Underground" has certainly acquired a cult following, and those people will be delighted with this release.
Image quality on the 3 discs is excellent, providing a fitting showcase for Viko Filac's stunning cimenaphotography, with an abundance of fine detail amidst robust colours.

The extras begin with "Shooting Days" - a 1996 documentary by Aleksander Manic - which follows the making of "Underground" and runs for 73 minutes.
It's a fascinating piece, pitching the story as a final scream for the old Yugoslavia, with cast and crew really buying into their director's vision.
With the atmosphere varying from tense to exuberant, the cast and crew are seen coping with a script which changed almost daily as new ideas were thrown into the mix.
The 29 minute EPK makes for a good companion to "Shooting Days", comprising of behind-the-scenes footage and interviews with Kusturica, Mirjan Jokovic, Lazar Ristovski, Miki Manojlovic and production designer Miljen Kljakovic.
Here, Lazar talks about his portrayal of Blacky - " a pre-war idler" - while Miljen discusses production design, with an interesting look at the ageing process for the three leads.
There's also praise for Goran Bregovic's extraordinary score, some b-roll footage of the wedding and Mirjan holding forth on her character and its development during the 18 month shoot.
A booklet accompanies this set, containing enlightening essays from Sean Homer, Dina Iordanova and Michael Brooke which add historical context to this film.
This BFI set is available to buy now, and comes highly recommended.