Looking Back At The Story Of Sin

While I'm in a Borowczyk mood, I thought I'd reprint a review I wrote, over a decade earlier, of "The Story Of Sin".
I'm extremely hopeful Arrow will eventually release this. 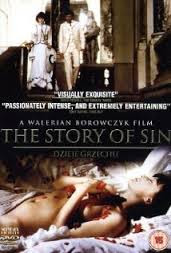 Sefon Zeromski’s literary classic provided the inspiration behind Walerian Borowczyk’s first (and last) feature to be shot in his native country of Poland.Working under the strict regime of the Catholic church, Borowczyk was forced to tone down the more sexually explicit elements of his source, and yet constructed an erotic melodrama that may yet turn out to be the film he’ll be remembered for. In her feature debut, Grazya Dlugolecko plays Ewa - a young woman who falls in love with a lodger at her parents home. When Lukas Niepolomski (Zelnik) turns out to be a married man, Ewa embarks on a tragic journey; her path littered by a succession of men who bring lust, deception, jealousy and death.

Those who associate Borowczyk with little more than boobs ‘n’ bums would do well to investigate this stately account of a life less ordinary which strides purposefully forward to the music of Mendelssohn. Here, Borowczyk shows a remarkable eye for detail in his socio-political condemnation of 70s Poland, while largly leaving his cast to grow with the story. The men in Ewa’s life - a wholly unsympathetic bunch - are well portrayed by a capable troupe of performers (Zelnik, in particular, is excellent as Ewa’s guardian devil) but it’s Dlugolecko who should receive the lion's share of the praise.
Her remarkable performance wrings every last drop of emotion from the words and images of this film, compelling one to wonder why she failed to reach the heights of her profession (more on that later). With an approach to her art and a style that reminds me of Fassbinder’s Hanna Schygulla, Grazya commands sympathy for her deeds and her suffering, taking us through several emotionally intense scenes, including a shattering event that you really will not want to witness: watch out for the roses scene, too, which surely inspired that much-talked about scene from American Beauty. Apart from a rather messy final scene (partially rescued by a beautiful closing shot), The Story Of Sin remains a timeless, harrowing study of the exploitation of sin and the innocent. Indeed, it inhabits the same block as Terence Davis’ The House Of Mirth and Harry Kumel’s extraordianary Eline Vere, while not being quite so moving.
Full marks, then, to Nouveaux Pictures for their release of a Region 2 DVD which honours this important work.In lieu of a full restoration, picture quality is as good as one could hope for, with a generally stable, colourful transfer. Extras are also well catered for, and include a commentary track and interviews with two key figures from the film.The still-gorgeous Dlugolecko takes part in a 6 minute interview, during which she explains how she got the role sans audition; why The Story Of Sin remains her biggest film, and her profound regret that she failed to push her career in foreign markets “until it was too late”. Borowczyk also gets 6 minutes of face time; giving us some background on his film; commenting that Disney features are more erotic than his own productions, and countering accusations of being “a big pervert” from a rather forward interviewer.While it’s a matter of regret that both interviews are so short in length, it’s a genuine pleasure to see and hear the participants.

The audio commentary track, from Daniel Bird, is restricted to comments on selected scenes with valuable information on Borowzyk’s career and a breakdown of Polish life during and prior to the making of this film.
Unfortunately, a major technical glitch meant that much of the commentary track was 'lost' to us, but there's a good chance it may one day surface in its entirety. I hope so, as Daniel is an authority not just On Borowczyk, but Polish cinema in general, and his information and observations will increase enjoyment and understanding.