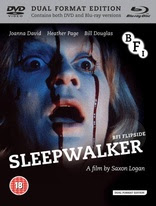 Great news from the BFI who will be releasing Sleepwalker in September. Check out the list of extras which will make this a very special release, and look out for a full review here. "

"The British Film Institute has revealed that it is planning to release a Dual Format edition of director Saxon Logan's Sleepwalker (1985), starring Joanna David, Bill Douglas, and Heather Page. The release will arrive on the market later this year. When wealthy couple Richard and Angela visit Marion and Alex in their decaying family home, their differing social and moral attitudes create uneasy tensions. An inharmonious evening of drunkenness and sexual rivalry soon turns bloody as the guests fall victim to an unhinged attacker. Featuring a rare performance from Bill Douglas (Bill Douglas Trilogy, Comrades), and starring British screen greats Joanna David and Heather Page (both of whom would go on to work with Douglas in Comrades), Sleepwalker is an outrageous and incendiary mix of biting satire and bloody horror that is at once reminiscent of otherwise unlikely bedfellows Lindsay Anderson and Dario Argento. Remastered from the only surviving print, this long-unseen mid-length film is presented here for the first time on any home video format, along with two shorts by its director, Saxon Logan, and the rare 1971 mid-length fantasy, The Insomniac, directed by Rodney Giesler."

" Stepping Out (Saxon Logan , 1977, 10 mins): a couple's untraditional early morning ritual is observed in a short drama which originally supported Polanski's The Tenant in UK cinemas"

"Working Surface: A Short Study (with Actors) in the 'Ways' of a Bourgeois Writer (Saxon Logan, 1979, 15 mins): Bill Douglas plays a writer struggling with a script about the interior lives of two women (playing by Joanna David and Heather Page)"

You can read my review of this film HERE
I was lucky enough to see this on the big screen several years back and also had a review copy on VHS.
I will be reviewing the Blu-ray in September.